Cadillac just introduced the CT5 sedan at the 2019 New York Auto Show, and it’s set to replace both the larger CTS and smaller ATS in the brand’s lineup. We have all the details and features for you, in addition to a deep dive with the car’s chief engineer, but now it’s time to see how it stacks up to the long-time standard bearer in this class: the BMW 3 Series. Now, the car is a bit larger than the completely new 2019 3 Series, but Cadillac says the 3 and the rest of the compact luxury sedan class is its target for this car. We’ll dive further into this little conundrum later.

This comparison will look at how these vehicles measure up on paper, as we haven’t driven the CT5 yet. That will come later, but we’re expecting it to be a proper sport sedan competitor with the 3 Series, since Cadillac is building it off GM’s dynamically superb Alpha platform. Now let’s get on with the comparison.

Both of these sedans come standard with 2.0-liter turbocharged four-cylinder engines. The BMW four-pot is a bit more potent, coming in with 18 more horsepower and 37 pound-feet of torque more than the Cadillac. Here’s our driving review of the BMW.

The only upgrade engine for both available initially are turbocharged six-cylinders. BMW offers up its revised inline-six, while Cadillac offers a V6. These six-cylinders are both 3.0 liters. Cadillac bests the BMW in brute torque by 31 pound-feet, but BMW takes the horsepower prize, making 47 more ponies. It’s hard to say which car will actually be faster to 60 mph — they’ll probably end up being about the same once official numbers are out.

This segment used to be one guaranteed to offer a manual transmission, but that’s not the case anymore. Neither Cadillac nor BMW will offer a manual to start, but expect to see the stick shift return to higher performance models of each car. For now, they both get torque-converter-style automatic transmissions. One dimension that isn’t going away from either anytime soon is rear-wheel drive. Both cars offer rear-wheel and all-wheel drive in every spec available. Fuel economy for the 3 Series is impressive at 30 mpg combined with the four-cylinder. We’ll have to wait and see if Cadillac can challenge that figure with its less powerful engine.

Here’s where a lot of the confusion about the Cadillac CT5 sets in. The CT5 is a tad larger than the 3 Series in its exterior dimensions, but the interior specs are nearly identical. What we’re dealing with here is a little bit of the problem the CTS had if one were to do a straight numbers comparison to the 3 Series. Nevertheless, the CT5 is smaller than the CTS by a couple inches in overall length.

To try and clear up any confusion about where the CT5 is positioned in the marketplace, Cadillac laid out the segment like this in a presentation to media. 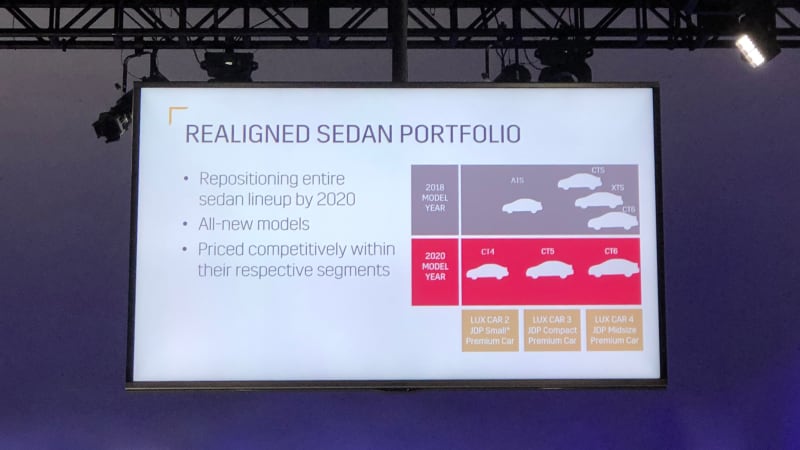 According to Cadillac, the CT5 is a compact sedan, and the CT6 is the midsize sedan. Next up to be revealed is the CT4, which is going to be the brand’s subcompact sedan to compete with cars like the BMW 2 Series, Audi A3 and Mercedes A-Class. We see that argument, and meet Cadillac a little past halfway with it. The CT5 would be small for the midsize segment (an inch or two shorter than a 5 Series in exterior dimensions to keep the BMW theme going) but it’s also long for the compact segment. It would compare even worse to the midsizers with interior specs, as it is hardly able to keep up with the smaller 3 Series in that space if you look at our breakdown. Perhaps this clears things up for you as to the CT5’s positioning, or perhaps it just muddies the water further. Bear with us as we continue to dissect this.

Another reason why this sedan will compete with the 3 Series is price. Cadillac hasn’t announced its pricing for the CT5 yet, but we were told by company representatives it would be priced right at its competition — the 2019 3 Series starts at $41,245. So budget-wise, you should be able to compare the two apples-to-apples as we’re doing here.

The CT5’s horrendous cargo volume is another example of why this vehicle isn’t quite up to midsize sedan standards. At only 11.9 cubic feet, it’s 43% smaller than the 3 Series’ trunk. Compact sedans have never been the most practical of vehicles, but this measure is far off the competition. Cadillac has prioritized the fastback shape over rear cargo space and rear seat headroom. Though the longer wheelbase of the CT5 ends up netting you 2 inches more rear legroom than the 3 Series, while suffering in other practicalities.

How they compare in pictures

Robotaxis look like the best short-term bet in autonomous vehicles

Fintechs zero in on fraud prevention

Tesla shares will bounce back after the recent 30% drop: Bernstein

‘Special and Beautiful’ Whistled Language Echoes Around This Island

Brazil’s Presidential Race: Who’s Ahead and What to Expect

Not so fast: Most Germans favor speed limits on the Autobahn

Lyft to address existential questions, while PayPal and Square earnings will...