The 2021 Bronco and Bronco Sport are the spearheads for Ford’s new 4×4 sub-brand, with the former taking the fight directly to the Jeep Wrangler and the latter providing Ford with a more rugged alternative to the Escape. We’ve already looked at how the new Bronco and Bronco Sport compare to their mainstream competition, but we’d like to see how the Bronco stacks up to another hotly anticipated returning nameplate: the Land Rover Defender.

Not to leave its little sibling in the cold, I decided to browse Land Rover’s lineup and see what might be a suitable counterpoint to the Bronco Sport. For better or worse, I found an almost-perfect fit in the Range Rover Evoque. So, how do these new American 4x4s compare to the Old Country’s more-expensive alternatives? Let’s dig in, starting with the big boys. 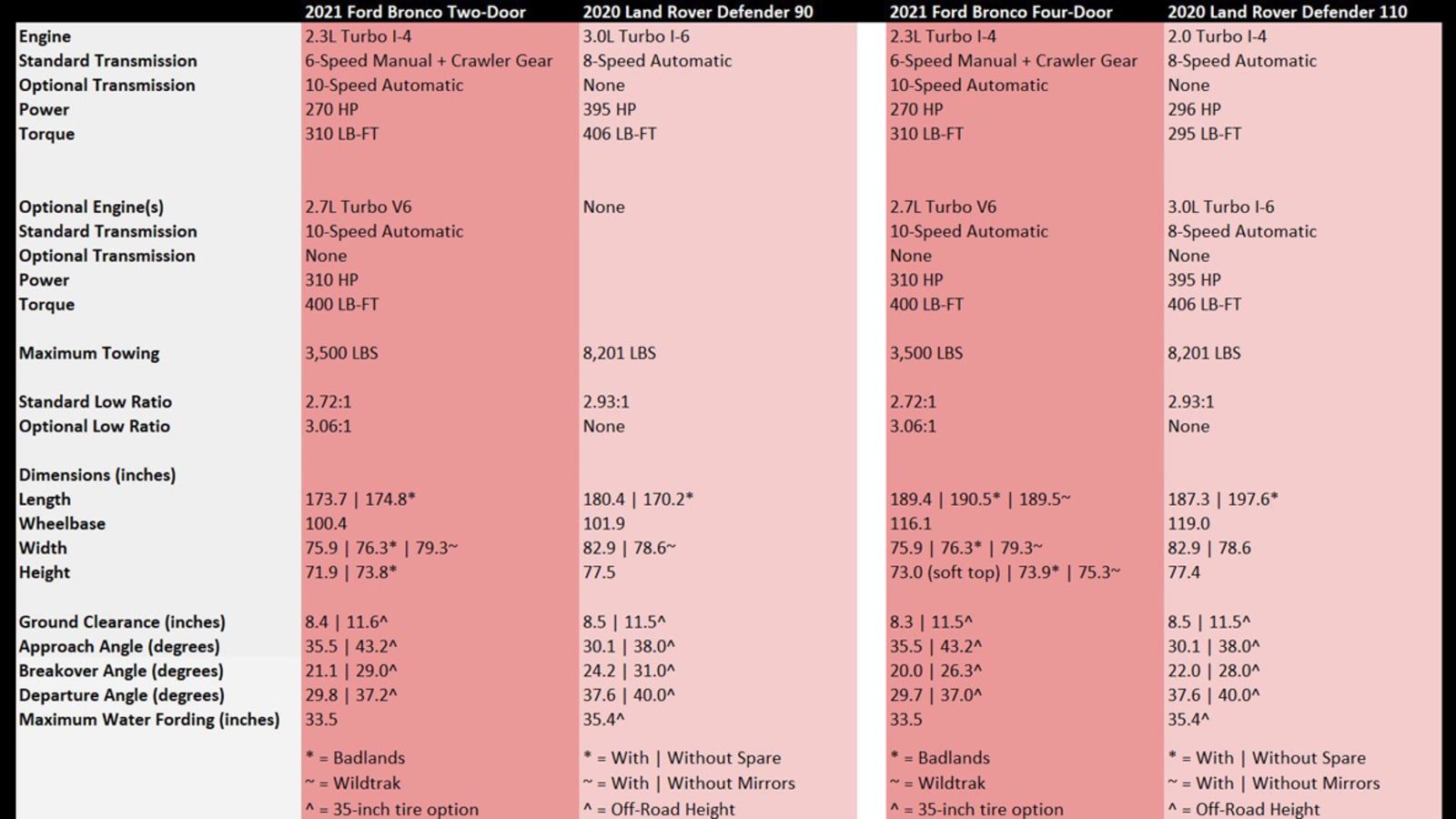 As you might expect from the Bronco’s robust credentials, it holds its own here against the more-expensive Brit. The Defender’s higher price point brings along a good bit of power advantage with both engines, but that’s to be expected. The Defender also has that trick adjustable-height suspension that the Bronco lacks, giving it an edge in practicality, and it can also tow quite a bit more.

On the flip side, there are quite a few advantages to going with the Ford, including a greater number of choices in terms of powertrain. The available manual transmission on four-cylinder Broncos is a nice bonus, for instance, as is the option of getting either the base 2.3-liter or the optional 2.7-liter engine with either wheelbase. The Defender is a bit more restrictive in this regard offering only the inline-six on the short-wheelbase model. As an added bonus, the Bronco is a convertible. That may not necessarily be a “plus” for all shoppers, but it’s certainly an added bit of versatility (and potential appeal) the Defender lacks. And of course, the Bronco can be had for as little as $30,000, whereas the Land Rover starts at $50,000. 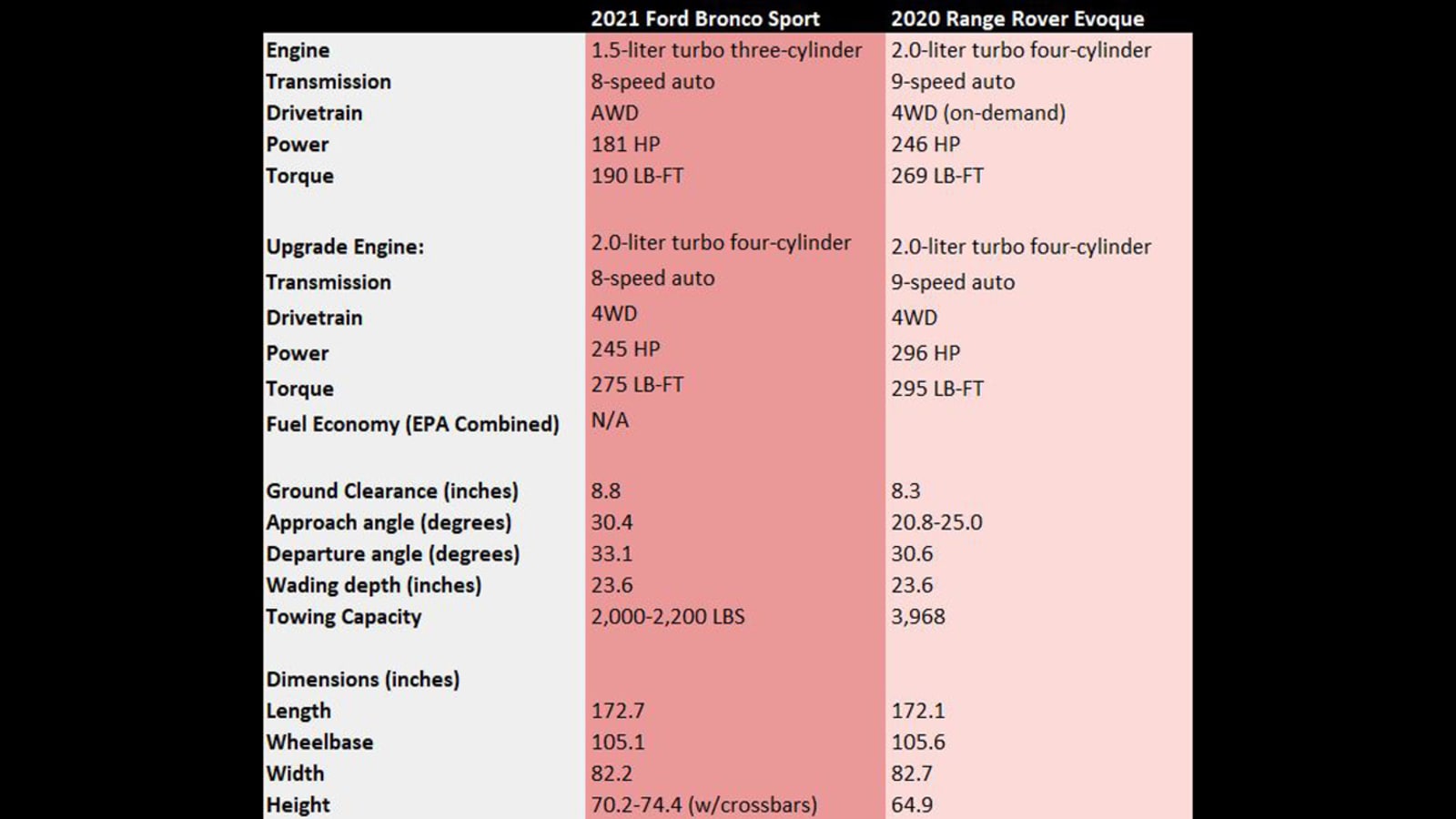 Now, on to the less-rugged siblings. The specs here are actually a little tighter in most respects, but the powertrain story is almost identical. The Evoque checks in where the Bronco Sport tops out, and the Range Rover gets an optional high-output variant of the 2.0-liter turbocharged four. Perhaps the Range Rover’s most significant advantage is in its maximum towing capacity, which is effectively double that of the Bronco Sport’s.

The Bronco Sport holds a visible advantage here in terms of off-road chops, boasting a much more aggressive approach angle, plus an extra half inch of ground clearance. These could make all the difference in the world out on the trails, but how likely are either of these to see much time off-pavement? While both offer a reasonable level of capability, they’re the more-stylish alternatives to their larger, rugged siblings made to be more pleasant on pavement.

The real determining factors will probably be money and style. If the latter is an issue, the Bronco Sport’s sub-$30,000 price is vastly more attractive than the Land Rover’s $43,000 tag. If it isn’t an issue, then it comes down to which is the more stylish, and that might be the case for both choices, so why not glance through these galleries and see what tickles your fancy?

NBA spreads on boards for first time in months

At End of a Violent Year, London Police Take No Chances...

Rich Countries Signed Away a Chance to Vaccinate the World

Tesla customer has been waiting more than 2 years for a...