Since Dieselgate, Volkswagen has been loudly proclaiming its electric future, with multiple planned electric vehicles in the next few years. The first one of its new “ID”-branded EVs for the United States is the 2021 Volkswagen ID.4 compact crossover. Meanwhile Ford slowly killed off most of its passenger cars in favor of SUVs and trucks its American customers crave, a move that could easily cause consternation about its overall fleet fuel economy. To ease that, however, Ford had its own green solution: the all-electric Mustang Mach-E.

We’ve driven both electric SUVs individually, but comparing them back-to-back gave us an opportunity to more closely examine these very different takes on the future of SUVs. Specifically, we’re comparing the VW ID.4 Pro S and Ford Mustang Mach-E California Route 1. These are both the long-range, rear-wheel-drive versions of their respective nameplates.

After considering their efficiency, charging speed, interior quality, cargo space and storage solutions, comfort and value, we discovered that each does certain things better than the other, particularly when it comes to driving dynamics. We also found that these long-range, RWD EVs would make good daily drivers, but one is great, beating the other in enough important ways to clearly be the one we’d choose to buy.

The Volkswagen has a couple advantages before you even sit inside of one. First is the price. It rings in at $45,690, including $1,195 in destination fees. The Mustang Mach-E California Route 1 starts at $50,900 including $1,100 in destination. At these prices, they’re optioned similarly, though the ID.4 gets heated and massaging front seats, a heated steering wheel and power passenger seat. Both also qualify for the $7,500 federal tax credit, in addition to whatever state or local incentives that may be available.

Second is interior cargo volume. With the rear seats up, the ID.4, at 30.3 cubic feet, just barely beats the Mach-E’s 29.7. That differential expands with the seats down, with boxier VW offering 64.2 cubes to the Ford’s 59.7. Also, there is a couple extra inches of depth below the rear cargo floor of the ID.4, and you can slide that floor panel into a lower slot rather than have to store it elsewhere. As for humans in those rear seats, they feel almost identical, with just a slight edge given to the Mustang’s legroom with a modestly tall person sitting behind a same-size driver. Headroom wasn’t noticeably different for a 6-foot-tall passenger. For our purposes (mostly moving kids in car seats around), these rear seats are practically identical.

The infotainment system isn’t quite as robust or in-depth as that on the Mach-E, which some people might actually prefer. The ID.4’s touchscreen interface is more intuitive than the Mach-E’s, at least for the vast majority of customers who have grown used to a smartphone interface. Its hard buttons, however, aren’t as instinctive to operate. Most of them are disagreeable touch-sensitive “buttons” on the piano black trim, or touch sensitive sliders to do things like change the volume, adjust temperature or even open or close the sunroof shade. (To be fair, the Ford doesn’t have a ceiling shade to close at all.) 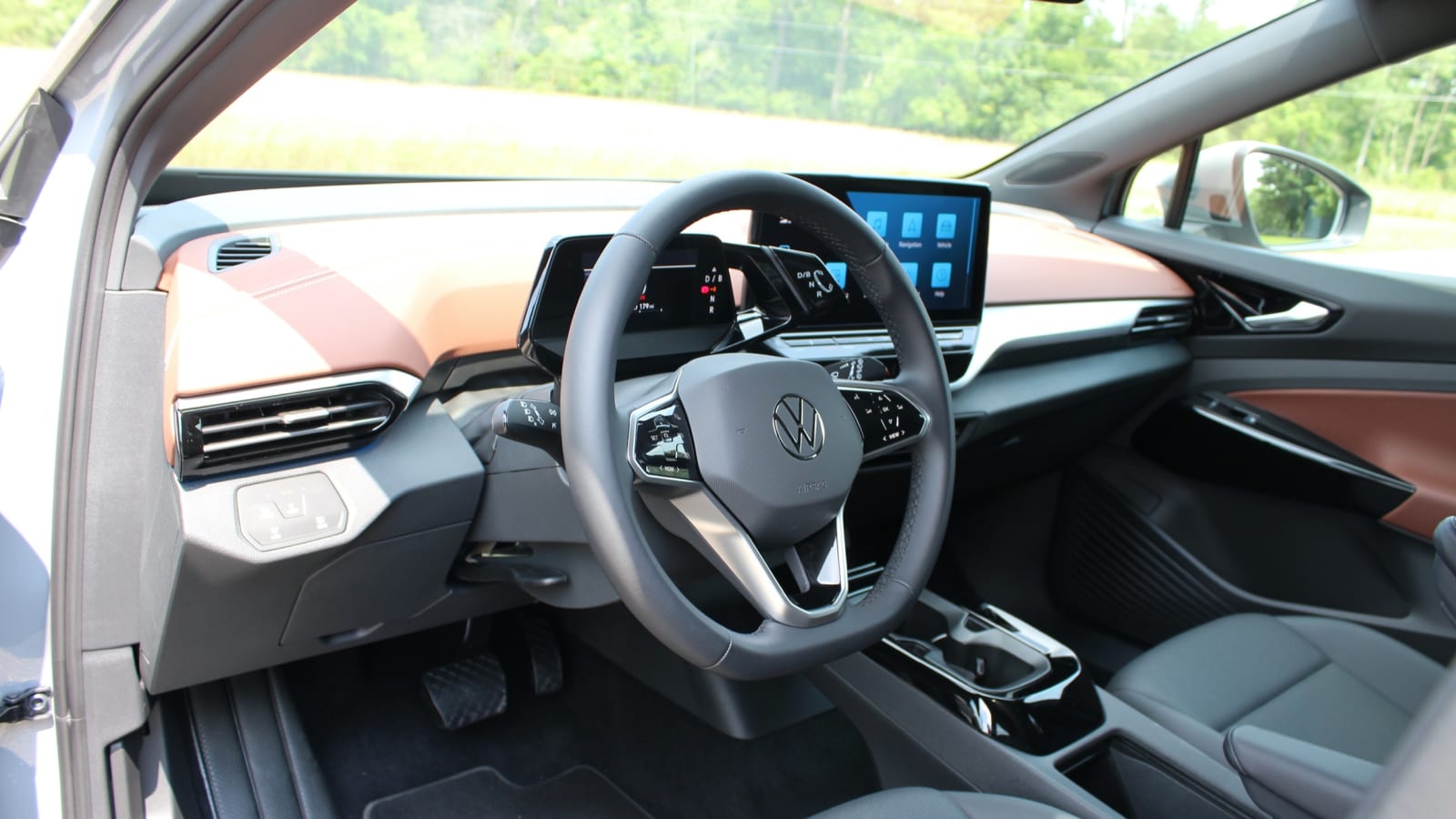 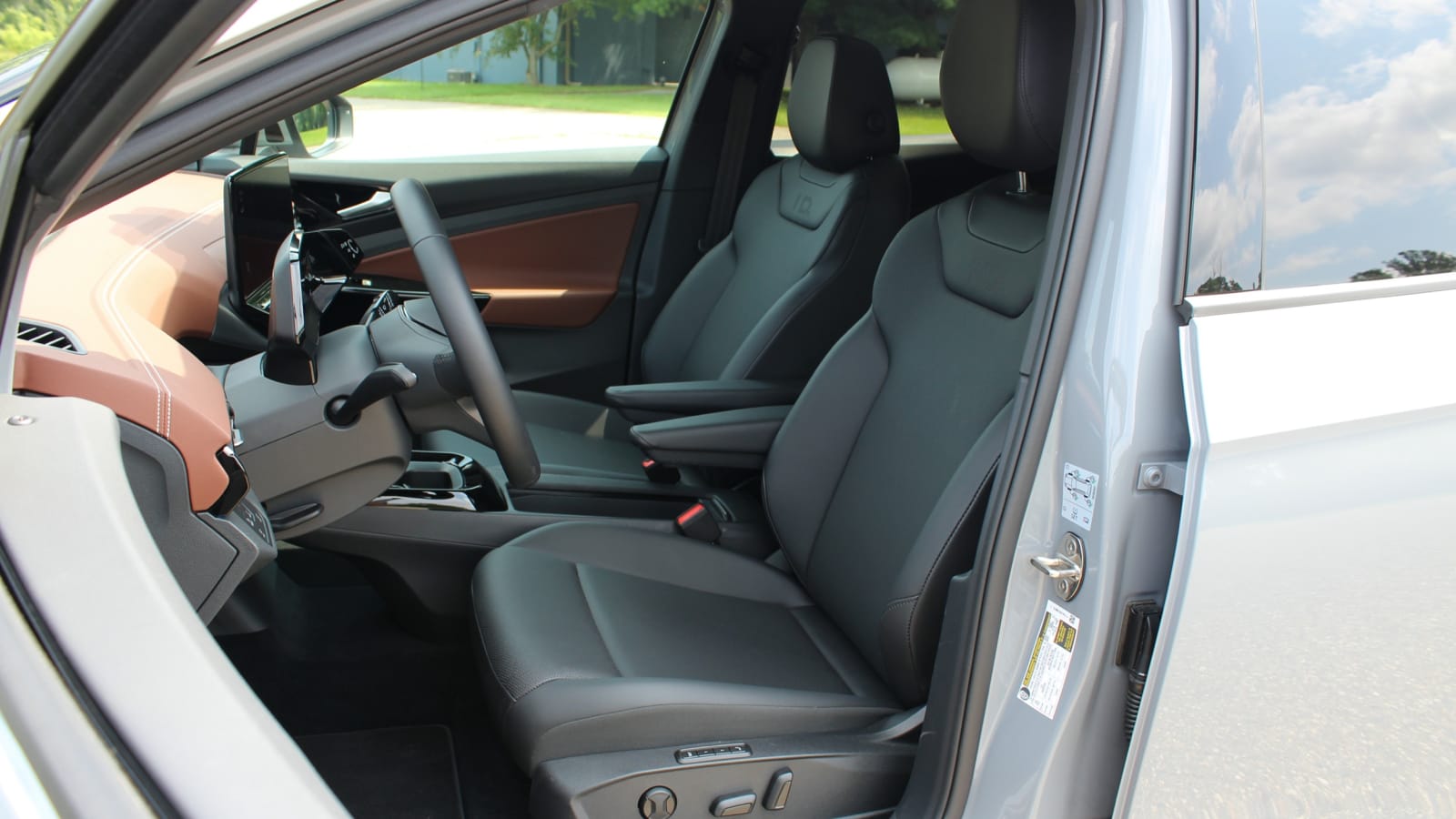 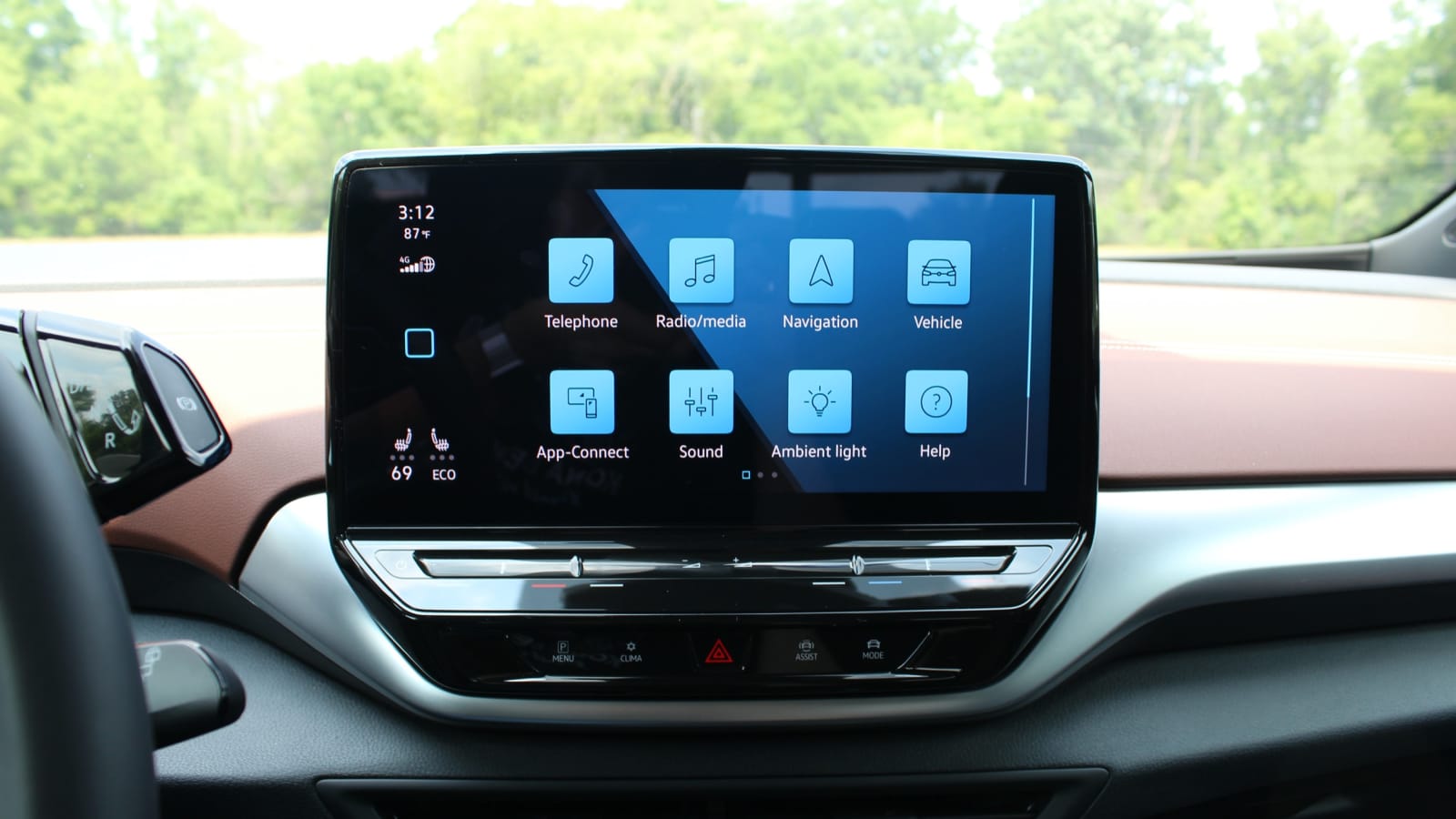 Both of these cars handle well thanks to their battery packs dragging their centers of gravity as low as possible. However, even if we’d rather have the Mustang’s superior acceleration (more on that below), it’s the Volkswagen that has more impressive chassis behavior. Not by much, but in a tight comparison, these things count. Its ride and handling feel more dialed in and buttoned down, with well-controlled rebound and body roll. It’s just better suited to throwing its weight around, and its excellent steering only makes it feel more precise. Turn-in is sharp, which makes quick maneuvers a snap. We didn’t have a Moose Test scenario, but it reacted quickly, effortlessly and precisely when we had to dodge some unknown, pokey-looking object in our path.

The Mustang can feel a little sluggish in pointing its bow sharply in either direction at rural highway speeds. And though it’s a hoot to flop the Ford’s tail out around a corner, it would be the ID.4 we’d choose when trying to nick an apex. In addition, it’s also the car we’d rather take Grandma across town in during construction season.

Braking is one dynamic element that does not fall in Volkswagen’s favor, however. We didn’t do any stopping distance tests, but we felt significantly better about the braking feel of the Mustang. The ID.4’s pedal feels oddly mushy and inconsistent when hauling it down from high speeds — an oft-endured trait in electrified vehicles that blend regenerative braking of the e-motor with the mechanical brake mechanisms at the wheels. The Mach-E’s feel much more natural, and doesn’t draw attention to itself beyond performing smoothly and confidently.

Finally, there’s the element most important to so many would-be EV buyers: range. This longest-range Mach-E is rated to go 305 miles on a charge. VW ID.4 is rated at 250 miles, which helps us remember one reason it’s less expensive up front. All said, the ID.4 is a pleasure to drive and sit in – it’s just outdone here.

While the ID.4 is quite a good electric crossover, the Mustang Mach-E is a great one.

The ID.4 is attractive, but the Mach-E is magnetic. This was the car that caught looks on the highway, and questions from passersby in the parking lot. There’s something to be said for the ID.4’s mature looks and ability to more or less blend in, but the Mach-E’s muscle-car-derived design language shouts louder. And while I did encounter some holdouts that seemed uneasy about the Mustang name being applied to a crossover, it’s evocative nonetheless, and generally in positive way.

The Mach-E’s acceleration is much quicker than the German rival’s, with its 6.1-second 0-60-mph time beating the ID.4 by more than a second.  That translates to a much more invigorating feeling from the driver’s seat, at least in a straight line. We also mentioned the range difference in the section above, which is a big deciding factor for many buyers, especially if it’s their first EV.

In addition to having a better brake feel than the VW, Ford’s offering also allows for true one-pedal driving. Flip a digital switch in one of the menus, and the Mach-E will bring you to a full stop when you lift completely off the accelerator, and it will hold you there. The closest the ID.4 gets is a “B” mode on the gear selector, which doesn’t provide nearly enough regenerative braking force to stop without stepping on the brake pedal. If you’ve ever driven an EV in stop-and-go traffic, we’re confident you’ll agree that the option to forgo the left pedal almost entirely is an indispensable one. The Mach-E gives you an excellent version of that. The Volkswagen does not.

Level 3 charging in the Ford is slightly faster, with the Mach-E capable of 150 kW, while the ID.4 does 125 kW. At Level 2, which is likely how most of the charging will occur (generally at home), the ID.4 takes the advantage at 11 kW compared to the Ford’s 10.5. We call this one wash. Still, you’ll be able to go longer between charges with the Ford, so long as you aren’t constantly taking advantage of that quicker 0-60 time. 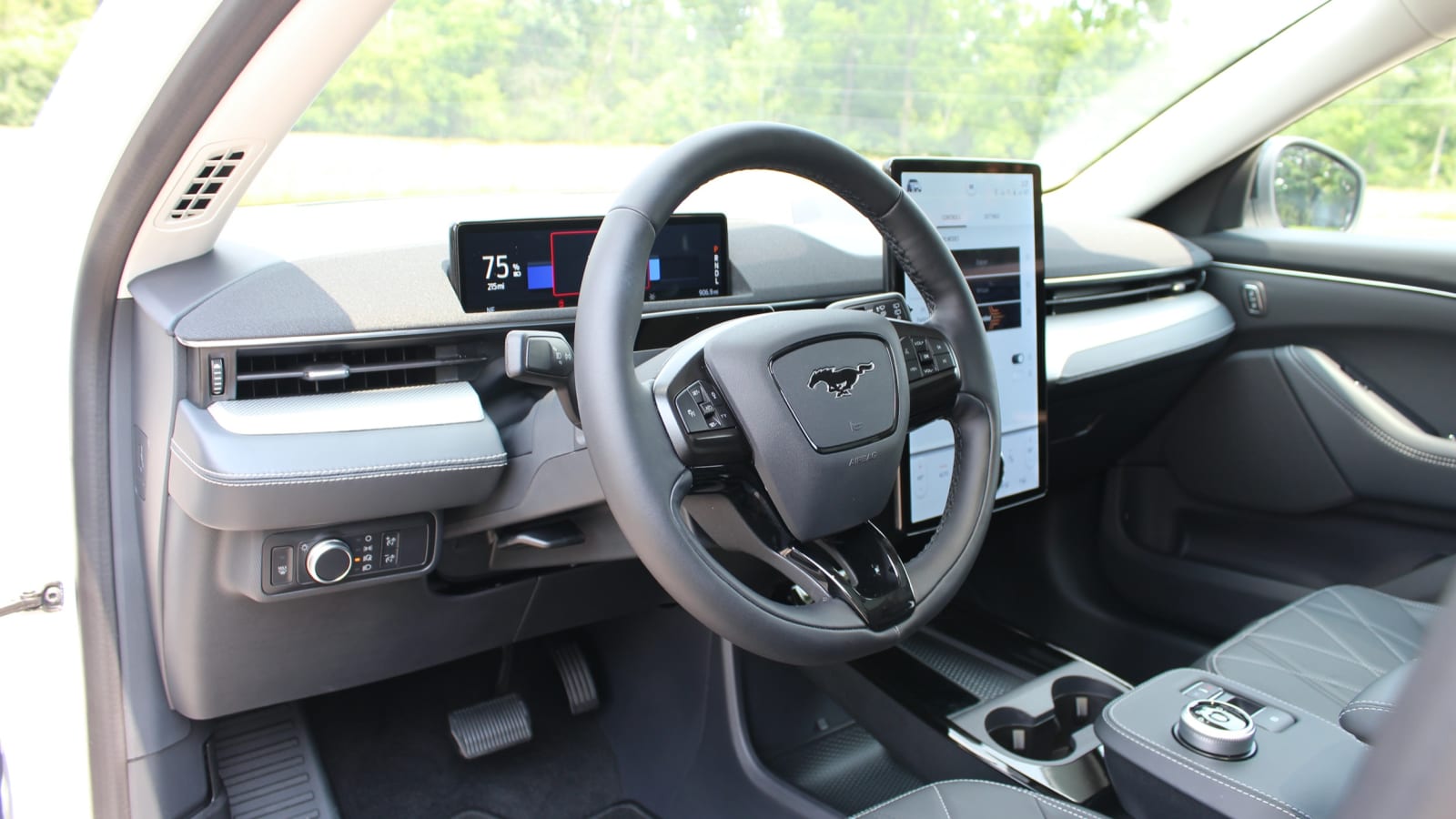 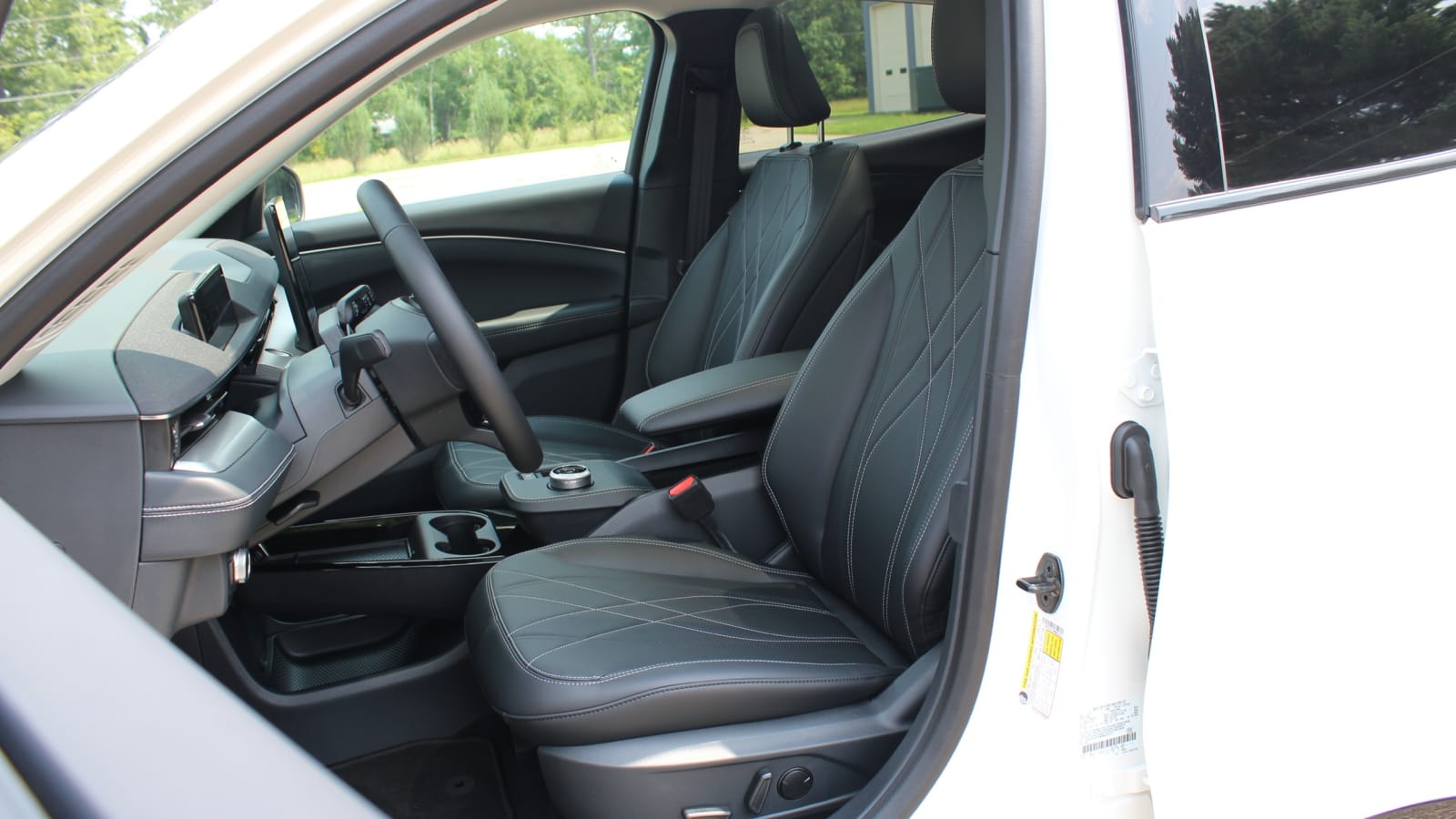 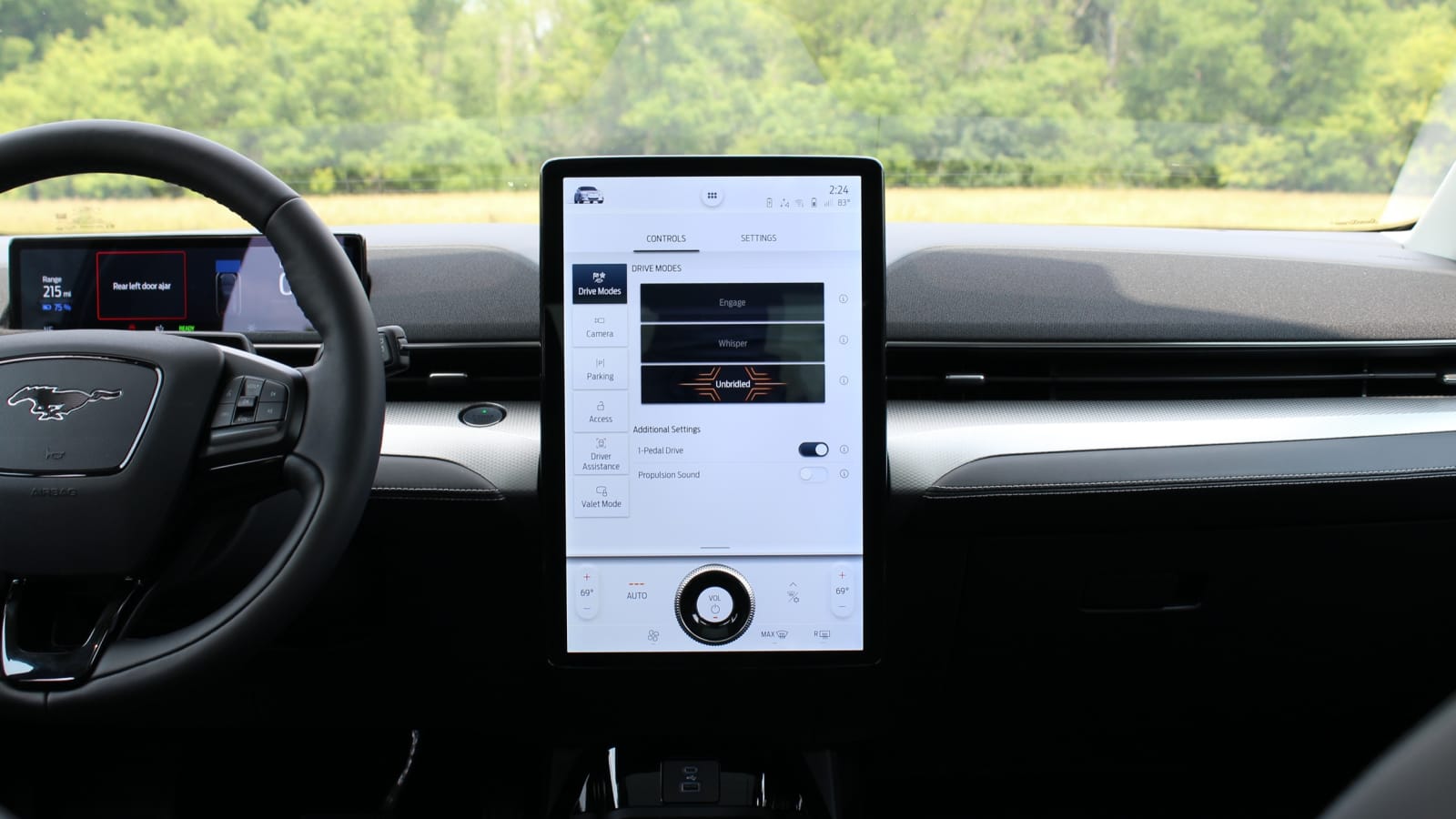 Efficiency is a practical tie, too. The Mach-E is rated at 108 city, / 94 highway / 101 combined mile-per-gallon equivalent. The ID.4 is just a touch lower, at 104/89/97 MPGe. That’s close enough to be statistically insignificant. Both are mid-pack in that regard, with fuel economy ranging from from 68 MPGe combined for the Porsche Taycan Turbo S, to 142 MPGe for Tesla Model 3 Standard Range Plus RWD. Both the ID.4 and Mach-E are far better than internal combustion cars.

Yes, the Volkswagen’s ride is more refined than that of the Ford, but the Mach-E’s is perfectly suited to daily driving and spirited motoring alike. Outside of a comparison test, it’s easy to praise the Mach-E for its driving dynamics. When you compare it back-to-back with the VW, though, it’s easy to see how the ID.4’s handling betters the already good Ford.

While the Mach-E’s gigantic infotainment touchscreen wows in comparison to the ID.4’s more conventional unit, Ford’s driving assistance tech is also superior. It calls ID.4 on its adaptive cruise control, and raises with its simultaneous lane centering, as well as a nifty “Intelligent Cruise Control” that will automatically adjust the cruise control setting based on the speed limit. With “Cruise Control Tolerance,” you can even set a maximum speed up to 20 mph over or under the speed limit. So if you want to go 5 mph over the limit, for instance, the cruise control speed setting would automatically change to 60 mph from 75 mph after you enter a 55-mph zone.

Another neat tech trick: You can use your phone as a key, and it’s easy to set up.

We mentioned earlier the VW’s slightly superior cargo space – at least in the traditional sense. The Mach-E does provide something the ID.4 lacks: a frunk under the hood good for an extra 4.7 cubic-feet of storage. You can even pack it with ice and use it as a cooler; the resulting water will automatically exit via a drain in the bottom.

So, which rear-drive electric crossover would you rather have in your stable? Do you want the fast one with more range and better tech, or do you want the merely quick one with more refined driving dynamics, more space and a lower price tag? The choice is yours, but even with the $5,000 price difference, we know which we’re choosing.

Carvana’s unwinding triggers a cascade of warnings on Wall Street

Police Respond to Mali Protesters with Tear Gas Ahead of Election

‘Originally there were no options,’ says pilot who landed his plane...

Top 10 Celebrities Who You Didn’t Know are Skilled Athletes