Now that the 2021 Ram 1500 TRX has debuted, it’s time to pit the off-road truck against its only true competitor: the Ford F-150 Raptor. Ford has left us in a weird spot with the Raptor, though. It’s currently in-between models, as the regular 2021 F-150 is out, but the 2021 Raptor hasn’t been announced yet. Since the F-150 is moving into a totally new generation for 2021, the Raptor is bound to be much different a year (or even months) from now than it is today.

Regardless, the Raptor as it stands today is still a worthy adversary for Ram’s new super truck. The TRX is much more expensive than the Raptor at its base level, but you can spec out a Raptor that comes close to the TRX’s base price. That said, a TRX can crest $90,000. Neither of these trucks are cheap. So, let’s get to the all-important specs and figures. The chart is below. We’ll note that Ford offers the Raptor in SuperCab and SuperCrew forms, but the TRX is only offered in Crew Cab size. For comparison’s sake, we’ve chosen to provide figures for the SuperCrew that closely aligns with the Ram Crew Cab. 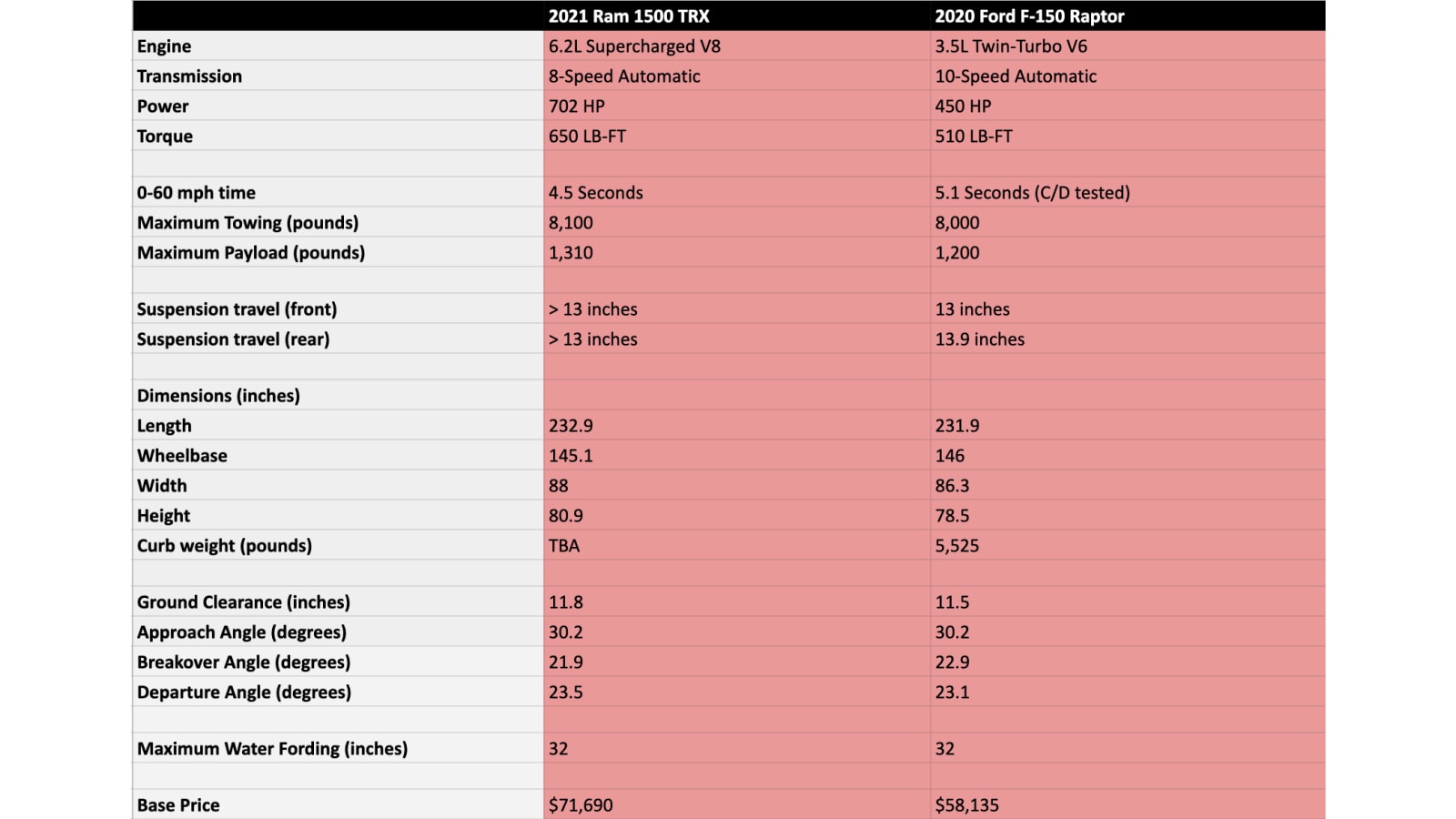 It’s fairly obvious who has the advantage here. FCA just keeps spreading the Hellcat love around, and Ram is the latest brand to get a taste. The TRX has a whopping 252 horsepower and 140 pound-foot advantage over the Raptor. It’s also far quicker to 60 mph than the Ford. Nothing in the truck realm can touch the TRX in a straight line. Plus, the supercharged V8 produces much better noises than the F-150 Raptor and its boosted V6 is capable of.

Fuel economy for the TRX isn’t out yet, but expect it to be even more horrendous than the Raptor’s. If efficiency is even remotely important to you, neither of these trucks should be on your shortlist.

Both these trucks come with four-wheel-drive standard, and they both have a number of drive modes that alter the powertrain’s characteristics depending on the terrain. Baja mode transforms the trucks into the desert runners that they both are at heart, but they’re plenty capable of crawling around rocks, too. We won’t know for certain which is best at specific tasks until we can get them both on (or off) equal ground. 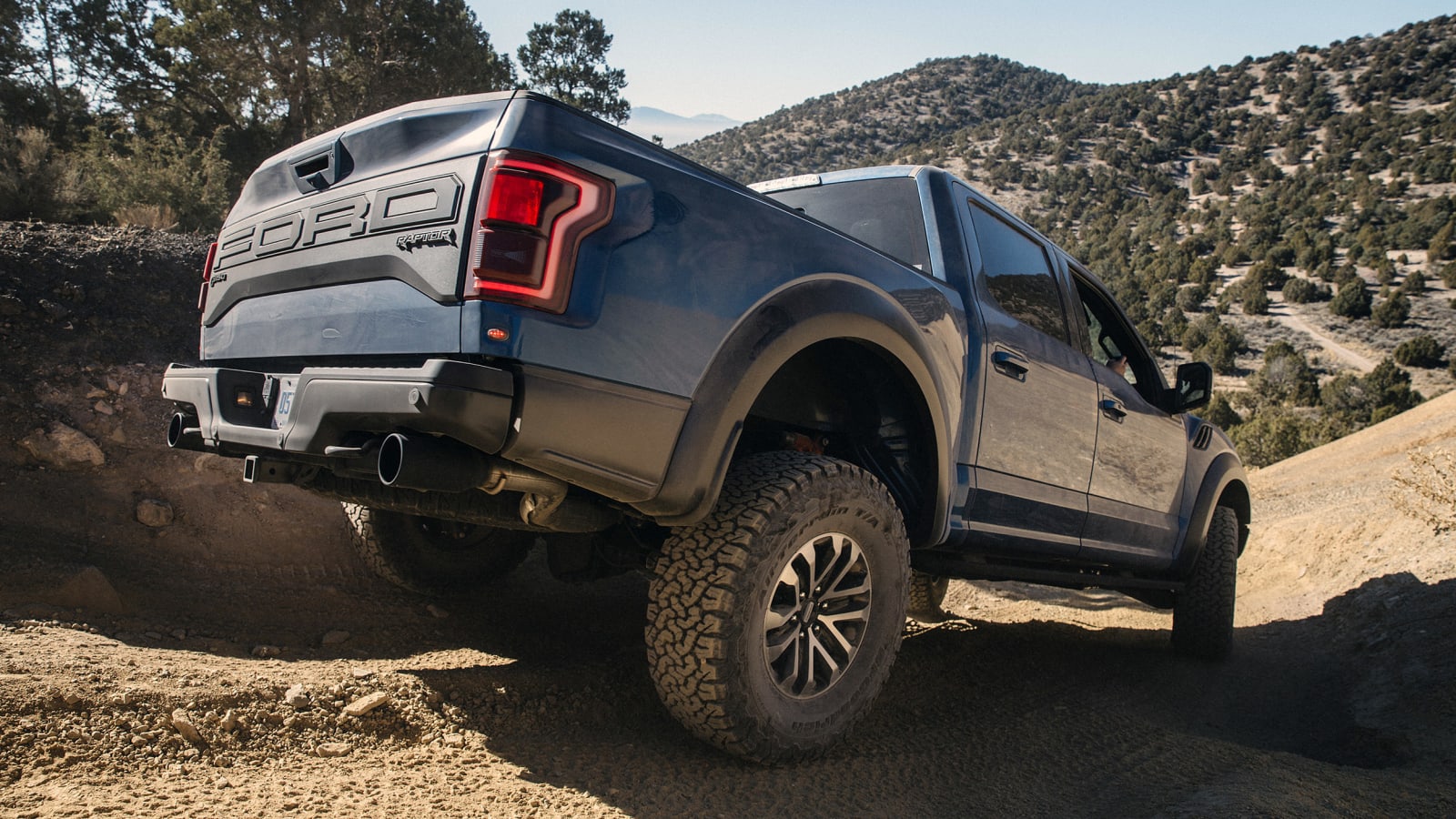 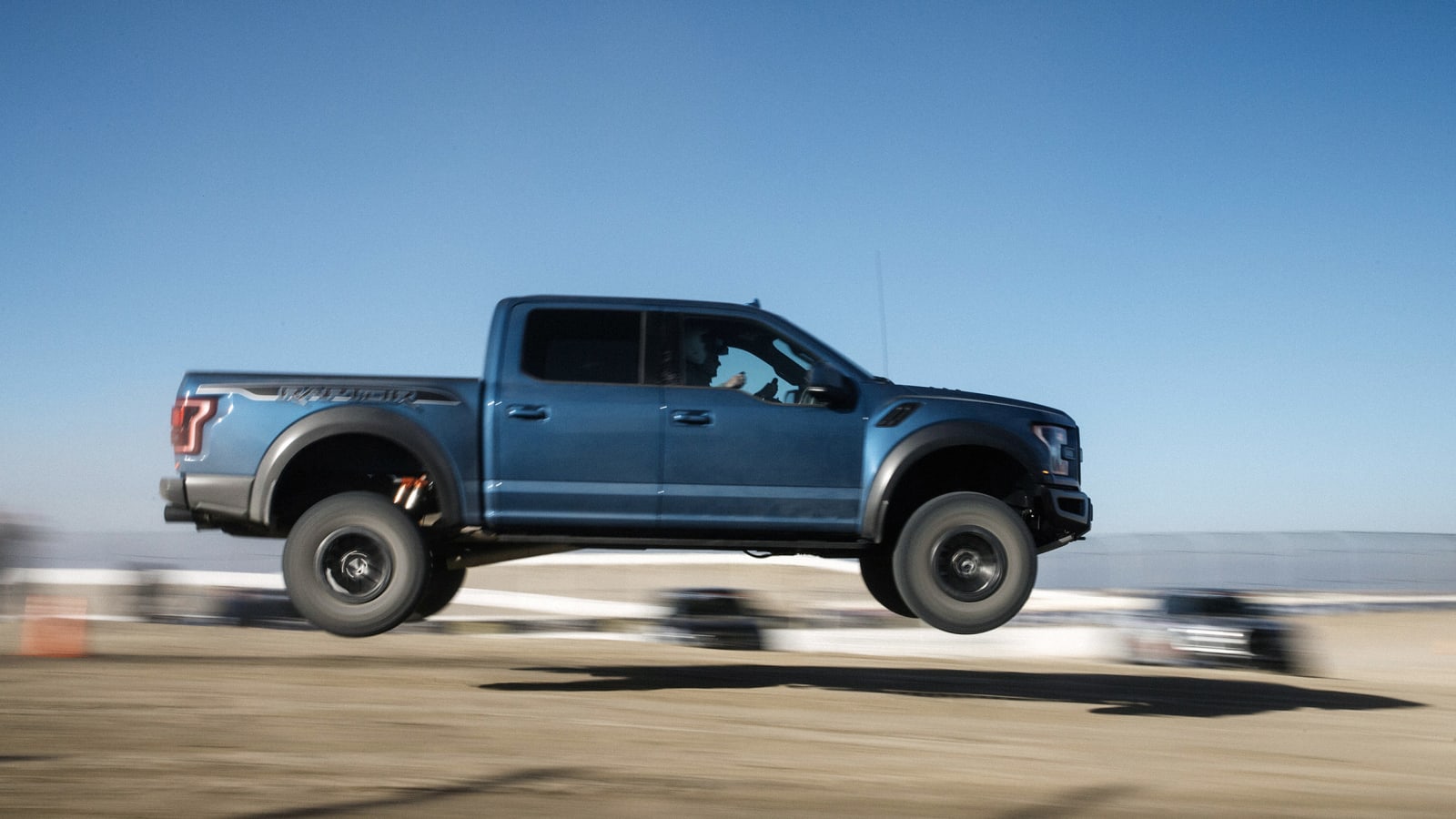 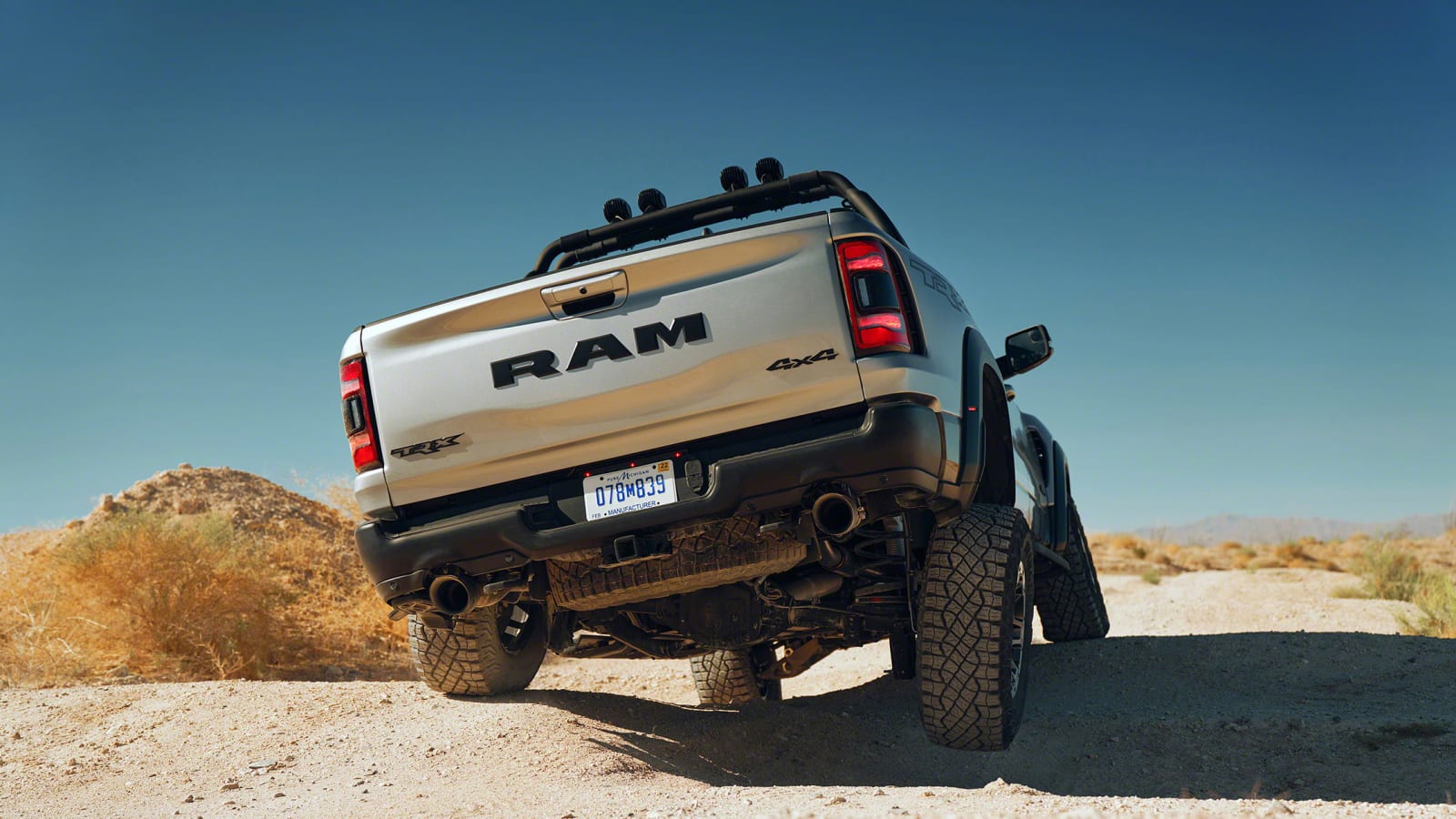 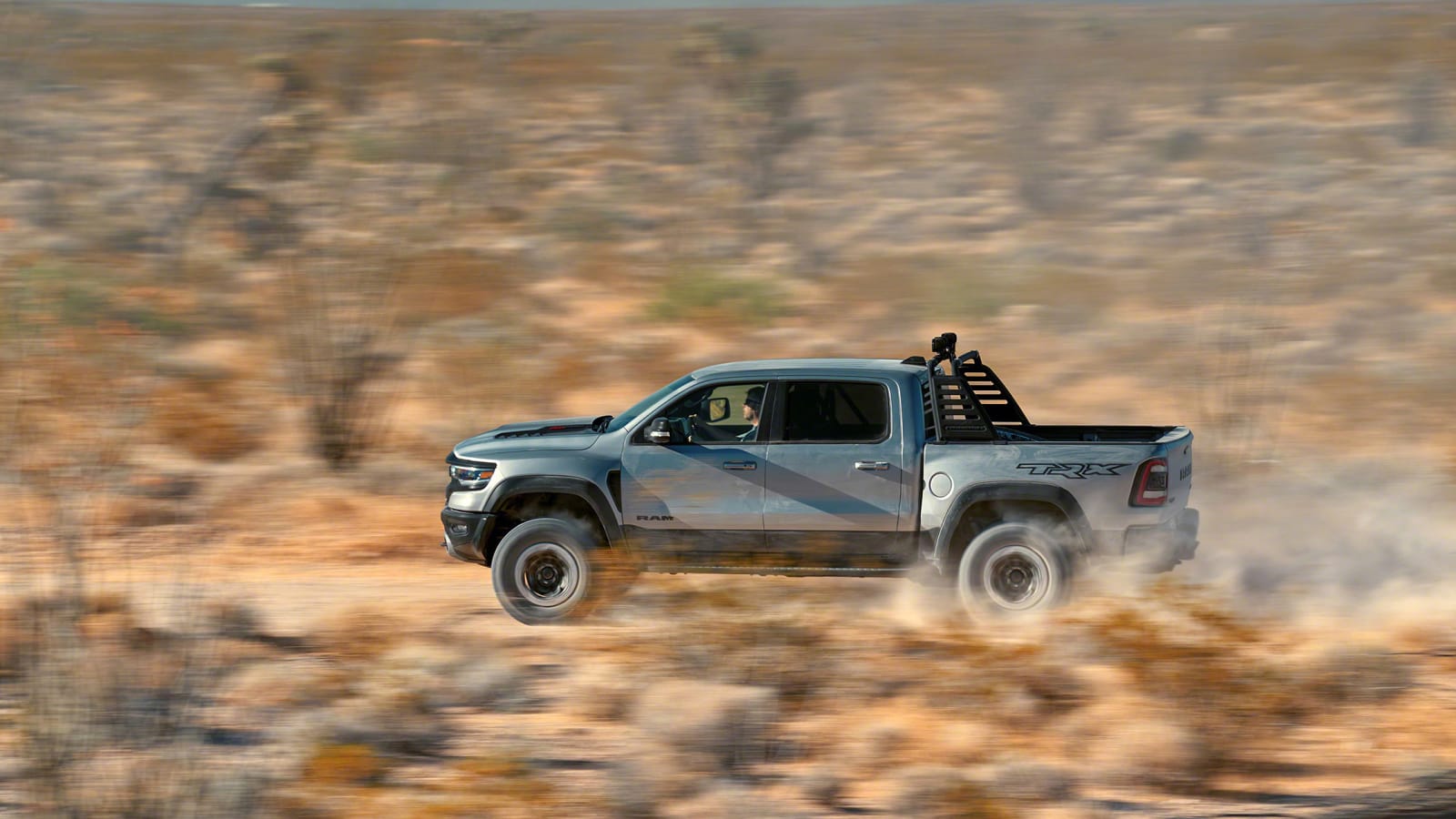 The specs are freakishly similar when we compare ground clearance, approach/departure angles and water fording, but these two trucks use different strategies to get there. Ford still uses a rear leaf spring setup, but Ram has retained its coil spring rear suspension design for the TRX. Spy shots appear to indicate that Ford is switching to a coil spring design for the next-gen Raptor, though.

Regardless, the two use different shocks to handle 100-mph-plus desert running. Ram has bought into Bilstein Black Hawk e2 adaptive shocks, whereas the Raptor uses FOX 3.0 Internal Bypass shocks with Live Valve technology. Both continuously adapt their damping characteristics with the terrain. They both use electronically-controlled valves to do this, taking a number of factors into account. Bilstein and Fox are two companies we trust to put together a lovely product for this application, but it’ll take time behind the wheel to ascertain which offers better real-world performance.

Ram also went a similar route as the Raptor with its modified control arms and general chassis improvements. Both have beefed-up frames to handle jumping, but of course, Ram is claiming that their frame is stronger. We’ll let the geniuses of YouTube sort this one out when they start launching the two.

The F-150’s limited-slip differential up front looks like it has an advantage over the TRX’s open front differential. Neither prioritize low-speed crawling with locking differentials in front, but both have electronically-locking rear differentials. The 35-inch tires on both trucks should work wonders for both high-speed and low-speed maneuvers. Ford goes with BFGoodrich K02s, and Ram uses Goodyear Wrangler All Territory tires. Skid plates are everywhere on these trucks, so unless you do something especially sketchy, you’re likely to make it home in one piece.

This is the biggest sticking point on the Ram. It’s extremely expensive. The $16,540 spread between the Raptor and TRX is massive, and it could easily make the decision for you. Is the extra power worth all that cash? We’ll also note that the Ram’s interior and tech features (when properly equipped) are more impressive than the Ford’s, but luxury is of less concern to us in this fight.

Ram is treating the TRX as its halo model, which explains the steep asking price. Ford has never treated the Raptor like a halo product. It’s simply a badass off-road truck with a nutty amount of capability. They’re the two most intimidating trucks on the road, but maybe the design of one will push you over the edge. Check them both out in photos below and let us know which you’d rather pound through the desert in.

Fractures in GOP on display as Liz Cheney faces criticism

Colorado skier dies from asphyxiation by his coat on a chair...