How quickly can perhaps the richest deal in NFL history come together?

We’re about to find out.

Or maybe we won’t.

It’s anyone’s guess as to what will happen with the Seattle Seahawks and quarterback Russell Wilson. What was already going to be a complicated contract negotiation feels even more complicated after Wilson gave the team an April 15 deadline for a new contract. According to ESPN’s Adam Schefter and other reports, Wilson intends to table negotiations if there’s no deal in place by that date, which is when the Seahawks’ offseason program begins.

Per Schefter, Wilson’s side gave the Seahawks that deadline in January, so it’s apparently not something it suddenly sprung on the team. But negotiations were not believed to be all that far along. Wilson’s camp and the Seahawks have had conversations, but it’s not as though things are in the home stretch.

“We’re not talking rocket science,” former NFL agent Joel Corry told ESPN. “Maybe my perspective is skewed, but these aren’t the most complicated things in the world to me. If you’re sufficiently motivated, you can get a deal done quickly. Look what happened with Khalil Mack when he was traded; they got a deal done in conjunction with that trade. That was like a 36-hour timeframe.”

Wilson’s 2015 extension was agreed to just ahead of the July 31 deadline. The fact that it took so long doesn’t necessarily spell trouble for such an early deadline this time. As general manager John Schneider later noted, summer schedules for some of the individuals involved back then contributed to the delay. That won’t be an issue again.

“You’ve got plenty of time if both parties are sufficiently motivated to get a deal done,” Corry said.

The deadline aside, the Seahawks have ample incentive to get a deal done sooner rather than later.

In addition to Wilson, the Seahawks want to lock up All-Pro middle linebacker Bobby Wagner and franchise-tagged pass-rusher Frank Clark this offseason. It will be difficult enough to extend all three given that they’ll each command contracts at or near the top of the market at their respective positions, harder yet if the Wilson negotiations drag out and hold up the other two.

It wasn’t until right after Wilson’s deal got done in the summer of 2015 that Seattle extended Wagner. The biggest of the big-budget items usually takes precedence. The sooner the Seahawks take care of Wilson’s contract, the sooner they can move on to Wagner and Clark. Defensive tackle Jarran Reed, who’s coming off a 10.5-sack season, is also entering the final year of his contract.

Wilson’s motivation for moving quickly is less clear. The easy assumption for why he set that deadline is that he prefers to have his contract situation settled before getting back to work with the rest of his teammates on April 15. Taking care of it before then would avoid the unwanted anxiety of feeling as though he has to prove his worth to the organization with each throw in practice.

Whether it’s intentional or not, the deadline is 10 days before the start of the draft. If Wilson is intent on cutting off negotiations after that point in the absence of a new deal, it would set the stage for him to go year-to-year — i.e., playing out the final season of his current deal then playing on consecutive franchise tags in 2020 and 2021. The Seahawks, whose front office prides itself on exploring every possible move, would have to wonder whether there would be more value in having Wilson for the next three seasons under those terms or — as far-fetched as the idea might be — trading him for a massive haul of draft picks and allocating elsewhere all the money they would no longer be committing to him. Wilson would get his megadeal from another team.

The likeliest outcomes involve Wilson remaining in a Seahawks uniform for at least the next three seasons, but leaving isn’t that far-fetched.

Schneider certainly is, along with his scouts. But Matt Thomas is not. Thomas, the Seahawks’ VP of football administration, manages the team’s salary caps and handles contract negotiations. 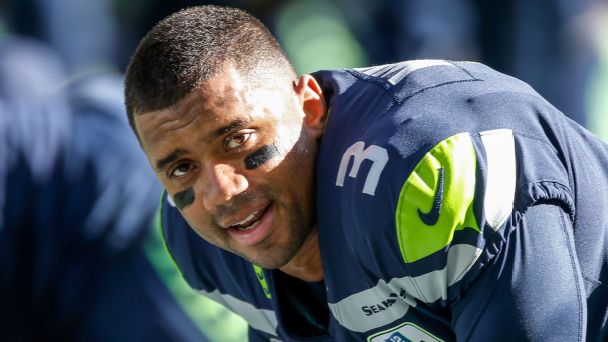 “John Schneider can focus on the draft,” Corry said. “… Matt Thomas, he’s the one who has all the time in the world to get a deal done.”

If there’s no deal by the deadline

Would Wilson’s side be open to continue negotiating past April 15 if they felt like significant progress was being made towards a deal? If the Seahawks made Wilson the type of offer he’s wanted all along in, say, June, would he turn it down on principle?

“I’m curious to see if that’s really a firm deadline that he holds to if they don’t get a deal done by April 15,” Corry said, “[if] he’s willing to entertain negotiations after that. Usually teams take it seriously when a player gives them an ultimatum.”

The non-exclusive version is the more common of the two franchise tags, but an exclusive tag might make more sense in this case since it would prevent another team from signing Wilson to an offer sheet. That would be slightly more expensive, according to Corry: $31.21 million for 2020 and $37.45 million in 2021 for a two-year total of $68.66 million.

Top 10 Movies That Pissed Off Their Fan Bases

25 Most Emo Animals Ever

Guard Josh Kline closing in on deal to remain with Tennessee...