An alleged MS-13 gang member was charged in connection with the Long Island-based machete killing of a 19-year-old in 2016, authorities say.

According to the district attorney, on Sept. 4, 2016, Lopez and other MS-13 members and associates allegedly struck Josue Amaya Leonor with a machete multiple times, killing him and burying his body in a wooded area of the Roosevelt Preserve on Long Island.

Allegedly, Leonor, who MS-13 members believed was part of a rival gang, was lured to the reserve with the promise of marijuana and was targeted as an enemy of the gang.

Leonor’s body was recovered May 30, 2018, according to authorities.

Prosecutors say that Lopez was a member of the MS-13’s Hollywood Clique.

He pleaded not guilty and is due back in court Sept. 25. If convicted, he faces up to life in prison.

Attorney information for Lopez was not immediately clear.

Police tell us as many as seven suspects may have been involved in the torture and murder of Leonor. 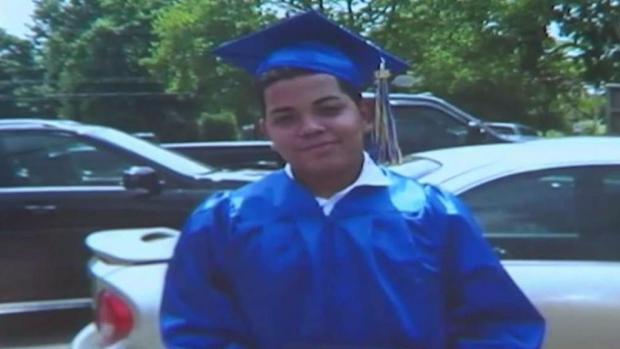 The news of Lopez’s arrest comes on the heels of the arrest of Kevin Lopez-Morales, 20, a suspect in death of a 15-year-old Long Island boy, Angel Soler, who was found hacked to death with a machete in a slaying linked to the vicious MS-13 gang.

Four others have already been arrested and charged over the last several months in Soler’s killing. Dennis Lopez, 18, was arrested in June. Two other alleged MS-13 members, David Sosa Guevara and Victor Lopez, were previously indicted for Soler’s murder, and the other suspect, Josue Antonio Figueroa-Velasquez, was arrested on murder charges related to the boy’s death in May, the Nassau County District Attorney’s Office said. Figueroa-Velasquez pleaded not guilty at his arraignment this past spring.

Allegedly, Figueroa-Velasquez spoke to investigators, and as a result, a search began at the Roosevelt Preserve. This search ultimately lead to the discovery of Leonor’s body.

Lopez-Morales, of Roosevelt, is seemingly also being charged in the death of Leonor.

Attorney information was not immediately available.

Federal prosecutors believe MS-13 has thousands of members across the country. The gang has been linked to more than two dozen deaths on Long Island over the past two years.

Police have been working closely with federal agents in the aftermath of MS 13 related killings. It was Homeland Security that helped Nassau investigators capture Lopez-Morales.

Arctic Warming 4 Times as Fast as the Rest of the Planet, New Analyses Find

Top 10 Actors Who Have Never Been Nominated For An Oscar

Why tax refunds have lost their sparkle

Social Security recipients may be in for a rude awakening later...

There’s a simple way Apple and other companies can help the...

Premier League: The art of winning a penalty sparks debate ahead...