RENTON, Wash. — A Pro Bowl left tackle not practicing because he wants a new contract is a big enough deal in its own right.

It’s an even bigger deal when the franchise quarterback, already frustrated by the team’s issues in pass protection, puts public pressure on the front office to get the situation resolved.

The Russell Wilson drama from earlier this offseason adds a layer of significance to Duane Brown‘s contract dispute with the Seattle Seahawks. It was underscored Sunday, when Wilson called his absence “pretty significant” and added, “We’ve got to figure that out because we need Duane Brown.”

All this comes as the Seahawks are dealing with another “hold-in” in safety Jamal Adams, who, like Brown, is at training camp but not practicing in the absence of a new deal. The Seahawks want to extend Adams and are working toward a deal. Brown’s situation is less straightforward. 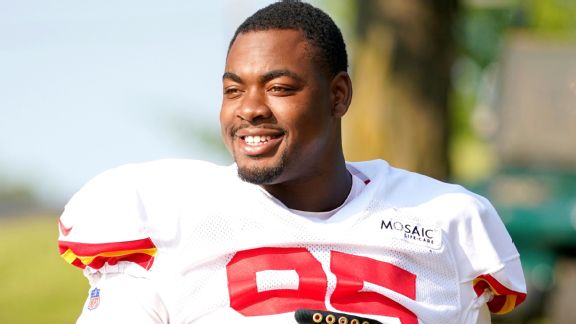 • How Yoga is helping Chiefs’ Chris Jones
• Washed up? 49ers’ Sanu generating buzz
• Duane Brown contract situation FAQ
• How Lamar Jackson is catching up
• Why Joe Mixon could have best season yet

He’s entering the final year of the three-year, $34.5 million extension he signed in the summer of 2018. It’s scheduled to pay him $10 million in base salary this year, up to $1 million in per-game roster bonuses and up to $500,000 in incentives.

The $11.5 million annual average of Brown’s 2018 extension now ranks 16th among left tackles, per Spotrac data. But his $10 million salary for 2021 is fourth highest at the position.

The Seahawks have not made Brown available to reporters this offseason, so he has yet to publicly comment on the matter. But it’s safe to say he’s looking for a raise and some security beyond 2021.

The Seahawks are not discussing a new deal with Brown at the moment, a source told ESPN.

Is the Adams situation holding things up?

If it was certain the Seahawks wanted to extend Brown, then that would be the case. NFL teams generally don’t negotiate more than one big contract at the same time, and Adams is their top priority, so Brown would have to wait his turn.

But it’s not clear if extending him is even in their plans whenever Adams’ deal gets done.

He’s playing at an exceptional level in his mid-30s. Brown didn’t miss a game last season and ranked second in ESPN’s pass block win rate as an offensive tackle behind only Andrew Whitworth of the Los Angeles Rams, who’s 39 years old. Brown ranks fifth in PBWR since 2018. Whitworth is first.

Brown’s agent, Kennard McGuire, can credibly argue that Brown’s contract has become outdated based on his level of play and all the left tackles whose annual averages have since leapfrogged his. He could also point to Whitworth as proof that a left tackle can sustain a high level of play into his late 30s.

Brown is the leader of Seattle’s offensive line, which carries added value.

So why might the Seahawks be wary of extending him?

Brown turns 36 later this month. And while his recent track record of availability is strong — including playoffs, he- has appeared in 47 of a possible 52 games since 2018 — he’s dealt with knee issues and the Seahawks have had to heavily manage his workload in practice.

They haven’t gotten great value from some of the third contracts they’ve given to veteran players in recent years, namely Marshawn Lynch, Michael Bennett and Kam Chancellor. This would be Brown’s fourth contract, so he’s at a point in his career where the team might instead prefer to go year to year.

Any fear in paying Brown wouldn’t be about immediate cap space. Extending him now could actually lower his scheduled cap number of $13.3 million. It would be about committing significant long-term cap and cash resources to an aging player.

What should we make of Wilson’s recent comments?

According to sources, some of Seattle’s offensive linemen were not happy when Wilson publicly voiced frustration in February over all the hits and sacks he has taken. That gives him another reason to extend an olive branch and stump for Brown the way he did Sunday.

From @SportsCenter earlier today, talking with @MattBarrie about Duane Brown wanting a new deal from the Seahawks, why it’s not clear if they’ll give him one and how the Russell Wilson situation adds another layer to this one. pic.twitter.com/CN2cbgHY7s

More than anything, though, Wilson was expressing how badly he wants Brown protecting his blindside. Pass protection has perhaps been his biggest point of contention with the organization, and now he’s practicing without his best pass-protector. There’s a massive drop-off from Brown to any of their backup options — including Jamarco Jones, Cedric Ogbuehi and Stone Forsythe — as there would be with any team who has a Pro Bowl-caliber left tackle.

Wilson, who played behind unproven young players and veteran stopgaps for a season and a half before Seattle acquired Brown, doesn’t want to experience what life is like without him.

So what happens from here?

The NFL regular season is just around the corner. Here are the biggest questions and roster projections for all 32 teams. Read more »
• Full 2021 schedule | Depth charts »
• Transactions | Injuries | More NFL »

Because Brown reported on time and is taking part in everything but practices, he’s not subject to the $50,000 daily fines that the NFL’s collective bargaining agreement mandates for veteran players who hold out of training camp. There’s no financial disincentive now to continue not practicing.

Seahawks coach Pete Carroll said Brown wouldn’t have played in the preseason regardless as the team tries to preserve him for the regular season. That assumes he isn’t so dead set on getting a new deal that he would be willing to miss actual games if he doesn’t get one.

It’s hard to say for sure without hearing from Brown. But if he were that dug in, chances are he’d already be holding out now as opposed to holding in.

Best Athlete in a Sport

What is a car lease excess wear charge?

Immigration agency to re-open some requests to defer deportation