The upcoming season is pivotal for 2014 Heisman Trophy winner Marcus Mariota. The dual-threat quarterback has plenty of ability, but in three seasons, he has yet to show he can be a consistent playmaker for the Tennessee Titans.

“I think it’s the absolute perfect marriage between player and system.”

Mariota’s peripheral statistics have been consistent the past two seasons, but after he threw 26 touchdown passes and nine interceptions in his second year, he regressed last season, throwing 13 TD passes and 15 interceptions. Goff’s TD/INT ratio improved from 5/7 in seven games as a rookie to 28/7 last season in the scheme used by Rams coach Sean McVay and LaFleur.

For LaFleur and the staff, the focus is on refining Mariota’s mechanics, something they will be watching when the Titans face the Packers at 8 p.m. ET on Thursday at Lambeau Field.

“We are really harping on him being conscious of his footwork, his fundamentals,” Vrabel said.

There’s an emphasis on catching the ball and immediately getting set to make a quick throw. That prepares Mariota to do something he did to perfection at Oregon: execute the run-pass options (RPOs).

“He has done it [RPOs] his whole career. He has a lot of experience with it,” LaFleur said of Mariota. “The more reps you get at something, typically the better you will be at it.” 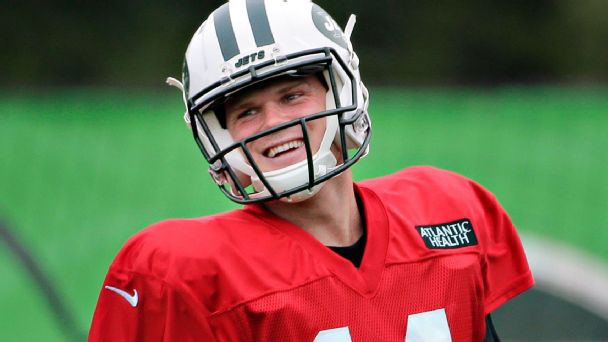 Quarterbacks coach Pat O’Hara has 16 years of professional experience playing quarterback, including in the Arena Football League, where things happen at a faster pace.

O’Hara’s drills focus on getting the quarterbacks to expedite the decision-making process and make the right reads. As the quarterbacks drop back, O’Hara claps his hands and points to the left or the right, signaling where they should throw the ball. Processing what to do quickly is crucial to the success of RPOs.

RPOs can put the defense — particularly linebackers — in a no-win situation. Typically linebackers are trained to read run first, which can open up a passing lane for an easy completion. If they play the pass, the quarterback will hand the ball off.

“It can be tough because you get caught in between a couple of things,” veteran linebacker Will Compton said. “You don’t want to get sucked up too bad in the run. You don’t want to leave your DB out there in a passing situation, having to make an open-field tackle.”

Backup quarterback Blaine Gabbert loves the simplicity of the approach: “Take what the defense gives you. If he’s open, throw it. If not, hand it to the [running back].”

Mariota likes the offense because he feels it puts players in position to make plays. The RPO aspect of the passing game will allow him to get the ball into the hands of his playmakers quickly and keep the defense honest.

“He [LaFleur] is going to put every guy on the offense in the best situation possible. For me, that’s exciting because he’s using our best assets,” Mariota said.

Although RPO concepts are part of the offense, the foundation of LaFleur’s offense is play-action. LaFleur broke into the NFL in 2008 as an offensive assistant under Kyle Shanahan when Gary Kubiak was the head coach of the Houston Texans.

Shanahan and Kubiak are known for how much their offense revolves around play-action, which has trickled down to LaFleur’s scheme. This might be even more of a match for Mariota.

“It’s the absolute perfect marriage between player and system,” former NFL quarterback and current ESPN college football analyst Dan Orlovsky said. “When you get Mariota into the play-action world, he is so much more confident throwing the ball. This offense that LaFleur is bringing over, the heart and soul of it is the play-action game.”

An athlete such as Mariota playing quarterback is a bonus when it comes to play-action. Defenses have to account for his ability to take off for significant gains.

Titans OC Matt LaFleur shares what he wants to see from Marcus Mariota in the preseason opener. Video by Turron Davenport

Mariota can roll out and attack the line of scrimmage, influencing a defender to come off a coverage assignment to try to stop him from producing a long run.

“It’s a part of my game, something I’ve done since I was a little kid,” Mariota said. “Whenever I have an opportunity to do it, I feel comfortable outside the pocket. Big plays happen that way. If you are able to do that efficiently, there’s always an opportunity to make explosive plays.”

In passing situations, pass-rushers want to attack the quarterback, but they have to rush Mariota with a little more discipline, not giving him a gap to escape.

“The rushers have to be conscious,” Vrabel said of Mariota. “When you get into a game and you’re not conscious of rush lanes, his running can turn into first downs really quick. He has the ability to scramble and keep plays alive. You can’t sell the farm on a rush to get to the quarterback.

All-Pro Titans safety Kevin Byard said: “It’s dangerous because in most defenses you don’t really have to account for the quarterback. But when you have a QB that can stress the defense by getting outside of the pocket, making those throws and even pitching on the run, it’s tough.”

It puts a strain on every level of the defense. Cornerbacks have to plaster themselves to receivers when facing a quarterback with Mariota’s ability.

Between play-action and RPOs, the Titans believe they will get the best out of Mariota this season. It will be up to the fourth-year quarterback to take advantage of a scheme that appears tailor-made for his skills.

Zion Williamson, by the numbers

Donald Trump lies. And he is doing a lot more of...

Southeast is getting hit by another round of severe storms and...