Jody Perewitz, from Perewitz Cycle Fabrication was tapped as one of six customizers to put their spin on the all-new Harley-Davidson Nightster platform, before the motorcycle had even been released to the public. We caught up with Jody at the Born-Free Motorcycle show to pick her brain on the overall experience as well as her inspiration for how she ended up with what you see here.

HOT BIKE: Who are you and where are you from?

HB: Talk about your overall thoughts on the new Nightster Platform:

JP: My thoughts of the new Nightster is it is a cool bike. It’s very innovative with some new designs, but still kind of an old feel of the Sportster. I wanted to give it kind of a ‘90s feel, so I did a teal paint job, and I also wanted to make sure that it stuck out. My father and I’s thing is paint. That’s what we do. That’s what my father had built his business on. So, I wanted it to be that people are looking at the six bikes or any Nightster in this, and they say, ‘oh, that’s Jody’s bike. That’s the one that she did.’ Whether they know it or not, they’ll think that that is my bike because of the bright color. 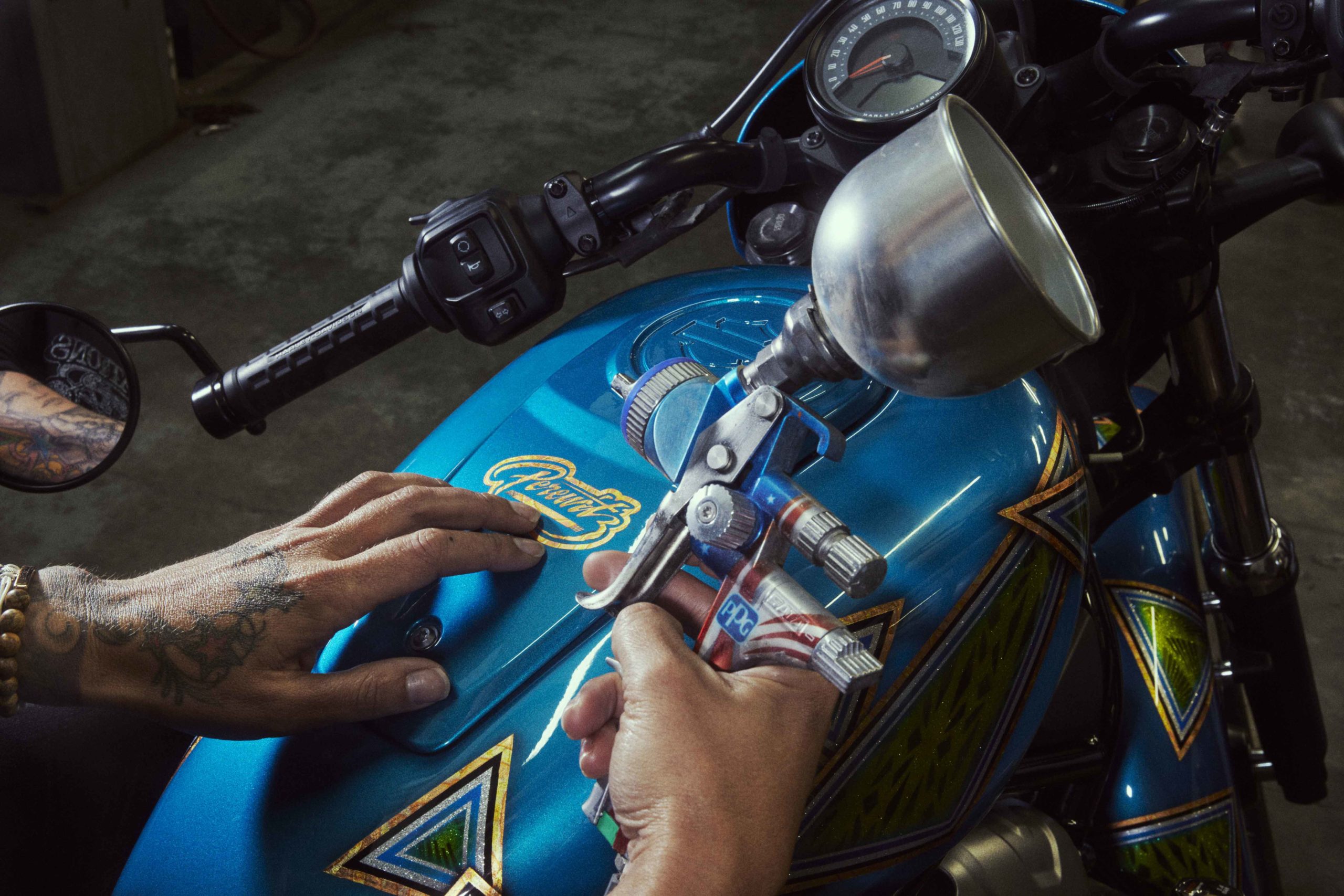 HB: What was your vision with customizing the new Nightster platform?

JP: When Harley approached me to customize this bike, I was ecstatic to do it. The only thing that was a hurdle or an obstacle, was the timeframe. And because this is a new model, there isn’t much stuff out there for it. So pretty much everything that we had to do, we had to make work or we had to physically make it.

We physically made the exhaust. I got together with Ryan Hunt and made an exhaust from scratch for it. The wheels, we had to make different spacers, different hubs. We ordered a 21-inch front wheel and found out that we got the wrong hubs. We had to switch the hub. So, in the time frame that we had, it kind of limited us because there is nothing out there for this motorcycle because it is so brand new. But I think that already in the same six months that this bike has been out there’s already going to be a lot of aftermarket stuff because it’s a popular bike already. My favorite components of the Nightster, though, would be that it has a bigger motor. It’s a light, nimble bike, so having a lot of power, whether you use it or not, that’s at your discretion. But at least you know it’s there, that if you should need it or want it, you got it.

HB: Any challenges with this one?

JP: One of the big challenges that we faced building this Nightster was actually the paint. I know this had nothing to do necessarily with the model or anything, but I said I wanted to do this bright teal color because teal, I feel like it’s a hot color right now. And my dad was like, ‘well, Jody, we have this House of Kolor teal that we can use. It’s an old color, but it’s a nice color.’ So I was like, ‘yeah, let’s do it.’

We thought that we had enough and painted all the pieces except two pieces and realized we didn’t have enough. We were like, ‘oh, we’ll just order it!’ Come to find out, they don’t make it anymore, so we found somebody that supposedly makes this color. So he overnighted the paint and we sprayed it, which was not even close to the same. We were in panic mode, and we obviously were on a time crunch that we had to get this done. We ended up putting literally Facebook messages out there, Instagram, any social media for anybody that has this particular color laying around. And fortunately, we found a guy that had a quart of it that he’s had for 15 years. Yeah, it was like we were already coming up with back up plans of, all right, we’re going to have to repaint it.

And I had already done the graphics on it. It would have been a nightmare to have to repaint. I mean, we’re already scrambling as it was that we would have really had to put in some time to repaint this. So I was clicking my heels. I could not have thanked him enough for sending us that extra quart of paint that saved us, and that was probably our biggest hurdle, as well as also the rear wheel on that bike, the hub. It’s a cush drive, but it’s a different cush drive than an FL. Ordering a real wheel was a challenge that we would have had to have a custom hub made, because that being such a new model, nobody has made a hub yet for it. But other than that, we really put as much effort as we could in the time frame that we had into that bike, and I think it came out great. I hope that the Nightster keeps becoming a cool bike and popular and a good seller.

HB: What’s your favorite part of this build?

JP: My favorite thing on this Nightster would be the paint. Paint is what I do. That’s how I make a living. So I was excited to do the paint. I wanted to give it that ‘90s feel with the triangles, the gold leaf, the flake.

We were able to do the solid pearl teal and then add the flake to it, so it’s kind of two different bases, and I love it. I think it came out good, exactly what I wanted.

HB: What do you think of the other custom Nightsters?

JP: I think all the other Nightsters are cool in their own sense. It’s neat. The Speed Merchant, he made it kind of like a flat track, like a hooligan kind of style, and that’s his thing. Everyone brought their own aspect to it, from exhaust to the fairings to building a tail section. It’s cool that everyone kind of really put effort into it and made them unique. Building this Nightster, though, was a cool experience. It was cool working with Harley-Davidson one-on-one in getting this model before anybody else saw it. And I’m proud to be out here at the Born-Free Show and with it on display so everybody can see it in person.

Kristen Bell Credits This Celebrity BFF for Teaching Her Self-Respect

Fact check: No, impeachment itself would not ban Trump from a...

Lindsay Lohan Says She Has an MTV Reality Show in the...

Returning to Exercise After Recovery From Coronavirus