When Doña Milagros Matos Marquez and her husband Don Cruz Marquez received the news that Hurricane María was approaching Trujillo Alto in Puerto Rico, they expected some rain and maybe a little bit of wind, like with previous storms. Instead María blew their roof off once the storm made landfall exactly two years ago on Friday.

In the months after the hurricane hit, the Federal Emergency Management Agency (FEMA) distributed 125,981 tarps to the island’s municipalities. At the same time the agency also provided 59,469 blue roofs, which are temporary roofs professionally installed by the U.S. Army Corps of Engineers.

At least 30,000 households across the island still live without a roof, former Gov. Rosselló said in May. Until recently the Marquez family was among them, after FEMA denied Matos Marquez’s request for help and her insurance company didn’t respond.

President Trump has said multiple times that the federal response in Puerto Rico since Maria made landfall on Sept. 20, 2017, has been great, rating it a 10 out of 10. But the island is still waiting for delayed disaster relief funds. Last week, FEMA ended restrictions they had placed in July over Puerto Rico to manage recovery funds amid the government’s crisis that ultimately led to the governor’s resignation along with members of his cabinet. Overall, Congress has allocated $42.8 billion, while the island has only received $14 billion so far.

In the meantime, organizations and private citizens have taken charge of reconstruction efforts in the wake of one of the country’s worst natural disasters, with an official death toll of 2,975.

“They have been our angels,” Matos Marquez said about the nonprofit organization “Techos Pa’ Mi Gente” (Roof for my People), which has been rebuilding her home since mid-July. The couple had been living on the first floor of their house, since the second floor was completely destroyed after they lost their roof.

The Marquez’s house in the months after Hurricane María.

“Techos Pa’ Mi Gente’s” founder Amarilis González was a schoolteacher who, in the month after the storm struck, saw the same three houses without a roof on her way to work everyday.

Out of frustration, she took to Facebook and wrote about how she wished she could help. Messages started pouring in despite poor cell service across the island. She followed up on Oct. 9, 2017: “DONATE A TARP Do you want to help Puerto Rico? Thousands of families need a tarp to cover their houses… I have decided to take a step forward and request my fellow worldwide friends to donate tarps.”

“I received tarps everyday,” added González. Once she had enough tarps she asked in another post for volunteers to help her start putting up these temporary roofs.

“We installed hundreds of tarps,” González said. She would go on to quit her teaching job to fully dedicate herself to the project. For the first three months, “Techos Pa’ Mi Gente” only worked on installing tarps. As time passed by González changed her focus to home reconstruction.

Through donations from private citizens and companies, she and her team of volunteers started to rebuild houses with the help of people locally and nationally.

“Once a month, we have carpenters from the U.S. helping us out,” she said.

González and her volunteers take seven days to rebuild roofs when volunteers arrive on the island exclusively to work on the project. If using local volunteers, it might take about a month, since they can only work on weekends due to the volunteers’ day jobs. González has experts who guide her and the nonprofit follows guidelines from the Professional College of Engineers and Land Surveyors of Puerto Rico, to make sure these houses are more resistant to any other potential threat.

González said that due to the bad state of the houses on the island, the organization spends at least $5,000 for each repair with money that comes from donations. Some repairs cost more.

Data obtained by The New York Times last year says two-thirds of the people in Puerto Rico who were granted help by FEMA to repair their homes received less than $3,000.

Matos Marquez has been grateful for Techos Pa’ Mi Gente’s help. “When I went upstairs and saw I had a roof and walls I kissed them and said ‘Thank you God,'” she said tearfully.

Seeing the reaction of people she’s helped has inspired González to stay committed. “This project can’t stop,” she said.

“Techos Pa’ Mi Gente” has helped 48 families so far and has almost a thousand requests of people in need.

Iris Torrado Alvarado is one of those thousands waiting for help. For Torrado Alvarado, living under a tarp has become her new normal in Coamo, located in the south of the island. FEMA gave her two blue tarps, for her house and her mother’s house, and $500 to cover food lost during the emergency. She wasn’t granted any other help from the agency because she didn’t meet the requirements needed. Both houses were under Torrado Alvarado’s mom name. Following FEMA’s requirements, you can’t get assistance for two properties that are under the same name. 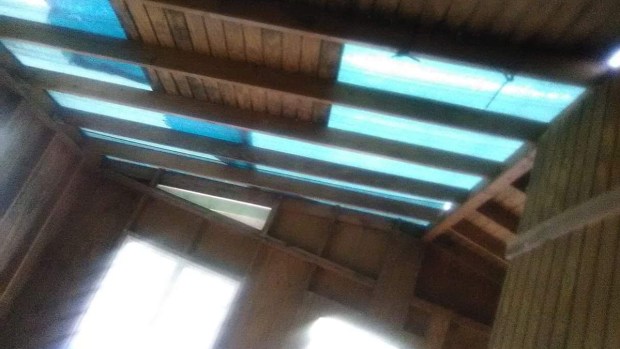 Since the storm, Torrado Alvarado has been looking for ways to fix her house and her mother’s, where she now lives, due to the poorer conditions of her own home. The 49-year-old woman lives on the second floor of her mother’s three story house.

“It’s been so hard… I feel helpless,” said Torrado Alvarado, who not only is struggling due to the destruction, but is also grieving her mother’s death in March 2018. Although Torrado Alvarado’s mother had cancer, she says that the emotional toll experienced during the aftermath of the hurricane played a big role in her declining health.

“I’m sure that seeing our homes destroyed advanced her death,” she said.

Worried about the thousands of Puerto Ricans who are living in similar conditions, Maricarmen Más Rodríguez, a member of Puerto Rico’s House of Representatives, said she wrote a letter in June to FEMA asking the agency to replace damaged tarps in Puerto Rico. She said she never received a response.

A FEMA spokesperson told NBC that they received the letter and that it’s under review.

“This situation has to be taken care of,” Más Rodríguez said, adding that what Puerto Ricans have lived through is unfair. “Since we are not a state we’ve been discriminated and we deserve an equal treatment.”

Más Rodríguez has referred people to local organizations that are assisting Puerto Ricans in need.

Also among the groups is CUNY Service Corps based out the City University of New York. Melissa Fernández, the director of Service Corps Puerto Rico, has traveled three times to the island with 500 students who have volunteered to help in the rebuilding process. Some of the municipalities they’ve operated in include Loiza, Orocovis, Arroyo, Rio Grande and Vega Baja. 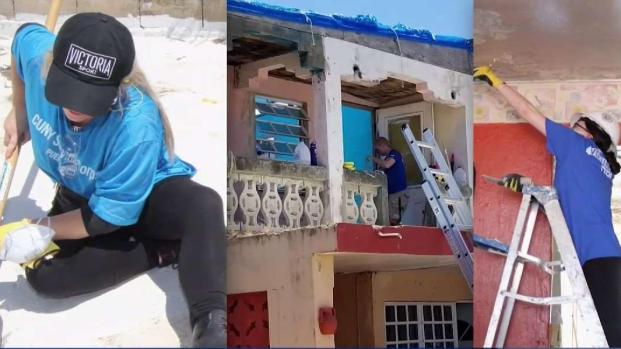 As a Puerto Rican, Fernández feel especially drawn to the project.

“It’s been one of the most important and meaningful experiences of my life,” she said. “It makes me want to work even harder to make sure everyone has a roof over their heads.”

See the surprise that brought Elton John to tears

UK tax cuts will benefit the rich more than anyone else

Browns expect Jarvis Landry to be ready for season after hip...

Britain, EU dig in their heels in trade talks

China is cracking down on North Korean defectors, activists say