The Navy on Wednesday cancelled a peer-review process for three Navy SEAL officers who supervised a fourth SEAL convicted of posing with a dead teenage captive in Iraq.

Acting Navy Secretary Thomas Modly said the case was becoming a distraction for the elite force.

The decision was the latest twist in the war crimes case of Chief Petty Officer Edward Gallagher, which led to a conflict between President Donald Trump and armed services leaders over military discipline. The dispute peaked over the weekend with the firing of Navy Secretary Richard V. Spencer

Gallagher and the three SEALs were notified last week that a board of peers would determine if they should remain SEALs. 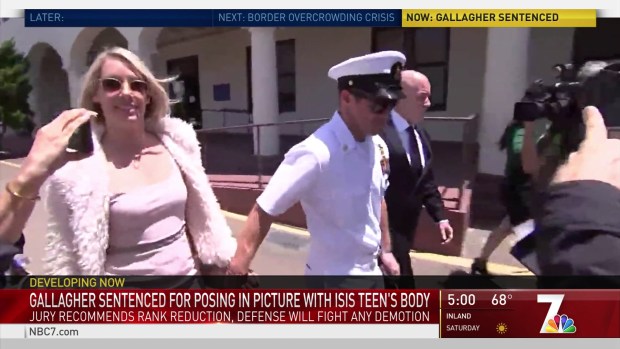 Trump then ordered the Navy to allow Gallagher to retire as a SEAL with his full rank intact. That led to Spencer’s firing over his handling of the matter.

Gallagher was acquitted of murder in the fatal stabbing of an Islamic State militant captive in his care in Iraq in 2017 but convicted of posing with the corpse.

Trump made no mention of the three SEAL officers also ordered to be reviewed. All three had overseen Gallagher during his 2017 deployment to Iraq.

But Modly said there were better ways to address any “failures in conduct, performance, judgment, or professionalism exhibited by these officers.”

“The United States Navy, and the Naval Special Warfare Community specifically, have dangerous and important work to do,” Modly said in a statement. “In my judgment, neither deserves the continued distraction and negative attention that recent events have evoked.”

Portier’s attorney, Jeremiah Sullivan, said Portier was happy to learn of the news from his chain of command Wednesday.

Attorneys for Breisch and MacNeil did not immediately respond to requests for comment.

'I felt like I lost control of my life': Protester tells CNN why he spoke out

Short on Cash, Businesses in China Rely on I.O.U.s to Keep...

Americans Held Overseas in Iran and Lebanon Are Freed

The economy is still chugging along — but the coronavirus lurks...

Judge weighs ‘urgent’ decision on whether to allow early voting in...

Hurricane Bears Down on Mexico, Causing Thousands to Evacuate