Seven weeks into the season, teams are separating themselves in the standings. A few we thought could be Super Bowl contenders, however, have issues that need to be fixed — quickly.

We asked our NFL Nation reporters to take the temperature of those six teams and explain why the coaches and players are preaching patience … for now.

Let’s start in Jacksonville, which has a surprising problem over the past month.

Everyone knows the Jags’ issues on offense, but the defense has allowed opposing quarterbacks to post the sixth-best QBR (76.4) in the league over the past three games, all double-digit losses. Jacksonville also has allowed 157.7 rushing yards per game over that span, which ranks 28th in the league. Is there any panic in Jacksonville?

The verdict: A lot of the Jaguars’ defensive issues can be attributed to the lack of help from the offense. During the three-game losing streak, the offense has turned the ball over eight times — including three inside its own territory, another returned for a touchdown, and two others in the end zone. Plus, the offense has had drives last four or fewer plays on 16 of its 36 possessions. That’s putting the defense on the field way too much, and those players are wearing down. The defense isn’t forcing turnovers and pressuring the quarterback the way it did last season, either, but it has been playing from behind, as the Jaguars have been outscored 57-0 in the first half of the past three games.

“We’re not playing well as a team. I don’t want to get into individual players or what side of the ball,” coach Doug Marrone said. “Right now as a team, when you talk about takeaways, turnovers and field position, those are the three things we need to focus on, which are all three things our team can do a better job of.” — Michael DiRocco

Matthew Berry is encouraged by Dion Lewis’ performance, but wants to see him build on this effort when the Titans return to action Week 9.

Despite adding a Marcus Mariota-friendly coordinator this offseason, the Titans’ offense has been dreadful — again. Tennessee ranks 25th in the ESPN Football Power Index‘s offensive efficiency and 30th in yards per play (4.8) and points per game (15.1), and Mariota hasn’t taken a step forward with Matt LaFleur. FPI now gives Tennessee a 13.5 percent chance to make the playoffs. Is it too early to panic?

The verdict: It takes time for quarterbacks to digest LaFleur’s offense. LaFleur is a first-time playcaller who still has to find his groove, and Mariota hurt his throwing elbow in Week 1 and missed parts of two games while dealing with the injury. A lot of times the Titans will make a big play and then have a momentum-killing penalty or turnover. Dropped passes also have stalled the offense. It’s an area they’ll work to improve upon.

“We’re going to try to get the receivers that you pointed out not in the right spot, or dropping the ball, to catch it better and more effectively,” coach Mike Vrabel said. “We always want to make sure that every time we catch the ball we’re taking care of it, we’re giving the quarterback a good target, and we’re where we’re supposed to be, so that he can confidently step back and use the pocket when it’s there and step up.”

There are going to be growing pains. The Titans have scored only seven offensive touchdowns, but wideout Tajae Sharpe‘s 100-yard receiving day offered some hope in last week’s loss to the Chargers. — Turron Davenport

The Eagles’ chances to make the playoffs dropped all the way to 38.8 percent after Sunday’s loss to Carolina, per FPI, and Philadelphia is now 2-3 since Carson Wentz returned from injury. The Eagles blew a 17-0 lead in the fourth quarter against the Panthers. All four of Philly’s losses have come by six points or fewer. Is it time to worry?

The verdict: Don’t count out the defending Super Bowl champs just yet. There are concerns, definitely: Injuries have struck them at the skill positions, along the offensive line and in the secondary; the defense is near the bottom of the league in takeaways (six) and has failed to protect multiple fourth-quarter leads; and the once-high-flying offense is averaging just 22 points per game. But their franchise quarterback, Wentz, has looked dynamite of late as he continues to put distance between himself and that ACL injury, and he could help fuel a turnaround.

With five division games remaining, there is ample opportunity to climb back atop the NFC East. — Tim McManus

The Chargers have one of the league’s best offenses, and though the defense hasn’t yet hit its stride, the upcoming return of Joey Bosa gives them hope. L.A.’s special teams, however, have been a disaster. The Chargers rank 30th in special-teams efficiency, and they’ve already changed punters (release) and kickers (injury). Could special teams wreck another Chargers season?

The verdict: They are starting to stabilize on special teams after the signing of punter Donnie Jones and addition of slot defender Desmond King as the return man. Coaches and players have said Jones, a 15-year NFL veteran, has brought a calmness to the group because of his experience. King gives the Chargers a sure-handed, good decision-maker. It’s a small sample size, but since Jones has taken over as the team’s holder, the Chargers have made 83.3 percent of their field goals (5 of 6) and 90 percent of their extra points (9 of 10) over the past three games. The Chargers finished with a 67 percent field goal percentage in 2017, the worst in the NFL.

Still, the Chargers have to figure out who will be the team’s kicker moving forward. Michael Badgley has not missed a kick while filling in for Caleb Sturgis, who has been out with a strained right quad the past two games. — Eric D. Williams

Minnesota is 4-2-1 and atop the NFC North, and $84 million man Kirk Cousins has played well in his first season with the Vikings. The running game, however, has been poor, as injuries have decimated the depth of the line, and second-year back Dalvin Cook has missed time — and has been ineffective when he’s on the field — with a hamstring injury. Minnesota ranks 28th in rushing yards per game (87.4) and 30th in rushing first downs (26). Is this a long-term issue?

The verdict: This may be the way things are in the running game for a while, and that’s fine if Cousins can keep orchestrating a prolific passing attack. The Vikings’ offensive line has performed significantly better the past three weeks. Cook has to be frustrated with the injury that has derailed his comeback season, but the Vikings are in a great spot with Latavius Murray filling the void while Cook recovers. Murray had multiple rushing touchdowns in both Weeks 6 and 7 and can be the physical, every-down, pass-blocking back whom the Vikings need to take pressure off Cousins when needed. 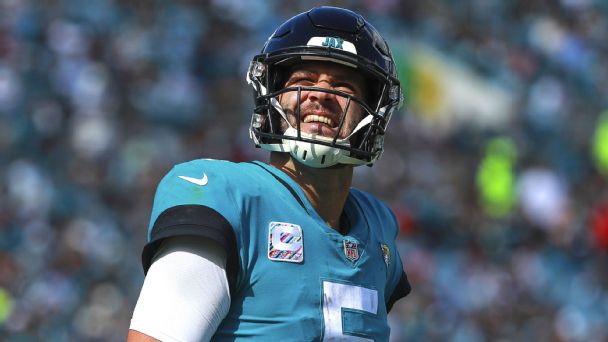 Catch up on what’s happening heading out of Week 7:
• Fixing flaws of top contenders »
• Easiest, toughest QB contracts to move

The recent effectiveness in the running game, coach Mike Zimmer notes, has to do with the Vikings sticking with their ground attack until something breaks through. If they can continue to follow that approach, they’ll be fine. When Cook is healthy enough to play, which very well could be after the Vikings’ Week 10 bye, Minnesota finally will get to add back into the game plan the element it has been waiting on. — Courtney Cronin

The Saints have won five straight, and they have the NFL’s best offense — yes, better than the Rams and Chiefs — by FPI’s efficiency rankings. The problem? FPI ranks New Orleans’ defense 32nd in the league. The passing defense, in particular, has regressed after an improved 2017 season. Could the Saints’ secondary derail Drew Brees & Co.’s run for another Super Bowl?

The verdict: The defense is still battling some inconsistency, though New Orleans has held its past three opponents to 23 points or fewer while climbing up to No. 17 in the NFL in yards allowed per game (366) and first in rushing yards allowed (72.3). The big play is still a big issue — both the ones the defense has given up and the ones it isn’t making. The Saints are tied for the league lead with eight pass plays allowed of 42-plus yards, including a pass interference call. Only one team has forced fewer than New Orleans’ five takeaways.

But as defensive tackle Sheldon Rankins said, the defense made a similar turnaround after a lousy start last season when “people were writing us off and saying, ‘Same old Saints.'” They still have most of the same personnel, and they added a young cornerback in Eli Apple in a trade with the Giants on Tuesday.. “Obviously we didn’t start the season the way we wanted to,” Rankins said. “But each week we’ve improved and continued to show flashes of the defense we think we can be.” — Mike Triplett

Wake up and smell the coffee: from your Ukrainian sunglasses

Who Gets Counted? – The New York Times

An Omaha police officer was shot four times while responding to...

Kavanaugh Defends Himself Against Sexual Assault Allegations With His 1982 Calendar...

U.S. labor market unexpectedly improves, but recovery expected to be a...