NASHVILLE, Tenn. — This offseason has been about putting quarterback Marcus Mariota in position to succeed.

The Tennessee Titans exercised the fifth-year option on his rookie contract during the 2018 offseason, but Mariota still hasn’t proved he can be a franchise cornerstone — never finishing higher than 13th in Total QBR during his four seasons in the league — and he’s not under contract beyond 2019.

There have been plenty of excuses for Mariota’s inability to firmly establish himself after being the No. 2 overall pick in the 2015 NFL draft, with injuries certainly a factor. Let’s take a look at some of the reasons beyond Mariota’s control for his up-and-down career so far — and why he’s better positioned heading into 2019.

Mariota has not been able to play in the same offense between seasons once in his career. Going through five offensive coordinators in five seasons is hardly a recipe for success. Fortunately, new offensive coordinator Arthur Smith was promoted from tight ends coach to foster a sense of continuity for Mariota. The scheme and most of the terminology will be very similar to what former offensive coordinator Matt LaFleur installed last season. That’s a bonus for Mariota, who was looking forward to the prospect of having the same coordinator before LaFleur became head coach of the Green Bay Packers.

“For what it’s worth, it will be nice to get back into the building and be familiar with what’s going on,” Mariota said while cleaning out his locker in January. “Everybody will be able to go out there and get ready to play and not try to engulf a new system.”

There will be some newness to Smith’s scheme, but the core concepts will be the same. Smith has been with the Titans since before Mariota joined the team. He knows Mariota’s strengths and areas that need improvement as well as any coach. Smith also has a firm understanding of the personnel on Tennessee’s roster. Now his job is to find ways to showcase Mariota and a talented group of players on offense.

A lack of weapons has hampered Mariota since he arrived in Nashville. Tight end Delanie Walker has been Mariota’s favorite target and most consistent pass-catcher over the past three years, averaging 77.7 receptions and 898.3 yards per season. Walker figures to regain a key role once he returns from the broken ankle he suffered last season. In Walker’s absence in 2018, wideout Corey Davis established himself as Mariota’s go-to receiver. Davis was on pace for his first 1,000-yard season before the offense shifted behind Derrick Henry, who exploded for 625 yards and eight touchdowns in December. Maintaining a strong running game should open up more passing lanes for Mariota. 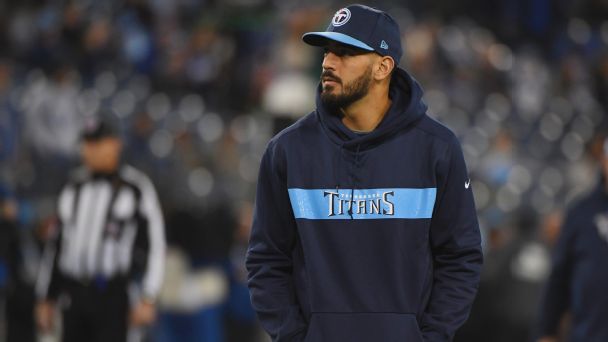 The big addition in free agency was Adam Humphries, a consistent pass-catcher who hauled in 72.4 percent of the targets that went his way in 2018. Despite being only 5-foot-11 and 195 pounds, Humphries has no fear when it comes to working the middle of the field and taking big hits from linebackers. Humphries will play an integral role as a slot receiver, especially on third down.

The team’s selection of 6-foot-1 wideout A.J. Brown in the second round (51st overall) gives Mariota a big target with a huge catch radius. Brown made a living in the slot last season (85 receptions, 1,320 yards, six TDs), but he also showed that he could play on the outside in 2017 (75 receptions, 1,252 yards, 11 TDs). His ability to gain yards after the catch will be imperative for the Titans’ offense. Getting the ball to Brown on various in-breaking routes and screen passes will give him a chance to showcase his playmaking ability.

The interior part of the offensive line struggled mightily last season, as Mariota was sacked a career-high 42 times. Guards Josh Kline and Quinton Spain were replaced with high-priced free agent Rodger Saffold (four years, $44 million) and third-round selection Nate Davis. Saffold should be a huge upgrade, especially when taking the field next to left tackle Taylor Lewan. Saffold was third among all guards in ESPN’s Pass Block Win Rate powered by NFL Next Gen Stats last season (minimum 300 blocks), holding his blocks for at least 2.5 seconds 87.4 percent of the time. With Spain moving on to the Bills, the Titans now have a more natural fit for their zone scheme in Davis, who should develop into a starter at some point in 2019.

Tennessee’s defense hasn’t been a problem — it’s been a strength. For the most part, that unit remains intact in 2019, which is the cherry on top for Mariota. Dean Pees’ squad finished last season with the NFL’s third-best scoring defense, allowing only 18.9 points per game. Mariota shouldn’t find himself in many shootouts next season. Coach Mike Vrabel’s formula for wins is relying on a stingy defense and a physical running game.

Chicago Bears running back David Montgomery out vs. New York Giants due to knee, ankle injuries

A 2006 Harley-Davidson Softail That’s Green To The Max