It will take years, potentially decades, to obtain a full picture of how graduating debt-free shaped the lives of these students at the historically black college in Atlanta.

In the meantime, a slew of studies documenting how student loans block people from significant purchases and opportunities suggest these graduates’ paths to adulthood will be much smoother.

Around 80% of students at Morehouse College have loans, and the average debt of graduates in 2017 was $31,833. Three years after leaving the college, less than a third of Morehouse students have begun to repay the principal on their debt, or the amount they borrowed before interest accumulated.

The gift could cost Smith $10 million to $40 million, according to estimations by Mark Kantrowitz, an expert on student debt.

Billionaire Robert F. Smith announced that he would be paying off the student debt of the entire 2019 graduating class at Morehouse University.

More than 90 percent of the college’s students are black. Research shows that African-Americans struggle with student debt more than their white counterparts. Fifteen years after leaving college, black adults have an average balance 185% higher than white adults.

Student loans can also have a perverse effect, in which the very debt that’s taken on to allow one to pursue their dreams can morph into a burden that requires them to ditch those plans and grab a job just to pay the bills. An additional $2,500 in student debt decreases an individual’s likelihood of being employed in a job related to their major by almost 5 percentage points, according to a recent study by economists Martin Gervais and Nicolas L. Ziebarth at the University of Iowa. 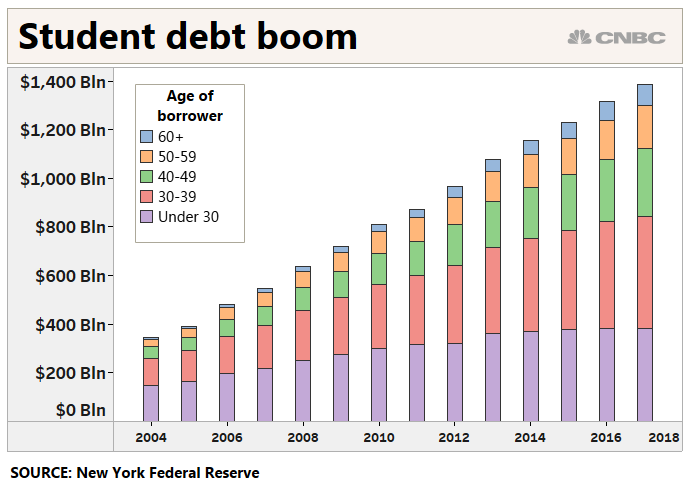 The Federal Reserve has found that a 10% increase in student debt decreases a person’s likelihood of owning a house by 1 to 2 percentage points. And college graduates without debt will have double the amount saved for retirement by the time they reach 30 as those who have debt, according to a recent analysis by the The Center for Retirement Research at Boston College.

A person with $30,000 in student loans is 11% less likely to start a business than a person who graduated debt-free, according to calculations by Karthik Krishnan, an associate professor of finance at Northeastern University who researches student debt.

“Instead of devoting thousands of dollars a month to student loan payments or being in an income-driven repayment plan for decades, they will now be able to invest in themselves,” Kantrowitz said.

1918: President Wilson Gets Lost in Paris

Donald Trump and Jim Jordan spoke for 10 minutes on the morning of January...